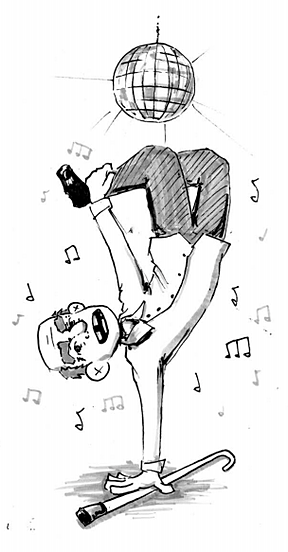 “Adolescents have a different idea of what people consider to be old age, compared to the idea people who are older than them have,” Allen said.

“Everybody ages differently, some faster than others,” Claudia Capurro said, an internal medicine physician specializing in geriatrics at the U.S. Department of Veterans Affairs (VA) in Tucson.

Though the VA recognizes that sixty-five is considered old, it still admits patients below the cutoff if they are experiencing geriatric symptoms.

But for some, the saying “you’re not old until you feel old” accurately sums up how they feel about their age. Sometimes a person may look old yet not feel old, despite the gray hair and wrinkles. Since every individual is different, it is difficult to set a certain number for when old age truly begins.

“Old age begins when you quit on being middle aged,” math teacher Bruce Downing said. “But it depends on what attitude you go into it with. You don’t have to be old at sixty just because you’re battling your body’s infirmities.”

“If somebody has that kind of attitude it’s a good thing,” Capurro said. “They probably aren’t that old and don’t have that many medical problems.”

Older people often mentor those younger than they are. It is rare to find anyone who hasn’t received helpful advice from an elderly person.

“I like older people. They offer insight on tough scenarios that are beneficial to completing that obstacle,” junior Alex Longerbeam said.

Older people have been around longer, hence the name, and have gained a larger amount of knowledge and insight. They like to give advice about lessons they have learned the hard way throughout their lives or just as they had been advised earlier in their lives.

Life expectancy as well as old age isn’t necessarily the same for both men and women. According to the the Organization for Economic Co-operation and Development (OECD), the average life expectancy today in America is 78.8 years (81.2 for females and 76.4 years for males).

According to a TIME magazine article, men tend to have shorter lives than women because they generally smoke more, eat more food, and do not to deal with stress as well. A larger food intake leads to higher cholesterol and stress can play a large role in cardiovascular disease.

But younger people, mostly teenagers, often dramatize the effects of old age, simply because they themselves haven’t experienced that stage of their life yet.

“Students tend to overestimate the memory loss of older generations. They think that everyone in their seventies has Alzheimer’s disease, which is absolutely not the case,” Allen said.

Stereotypes have been created of old cat ladies who go to bingo every Tuesday and Thursday. Younger people focus on rare cases that inaccurately portray the entirety of the older generation.

Younger people look to old age with mixed emotions. But when looking from a broader perspective it’s just another stage of life full of its high points and low points. Old age has and will always be something that is respected in society.

“It’s going to happen,” junior Griffin Holt said. “I’m not unhappy nor am I excited, it just happens. It’s just a part of life.”