Acalanes High School swarmed with police officers and emergency vehicles on the morning of Thursday, October 13 after two suspects in an allegedly stolen car being pursued by the Pleasant Hill Police stopped on Stanley Boulevard at the southern end of campus.

One suspect exited the vehicle and entered the Acalanes campus, while the other fled into the surrounding neighborhood, according to Acalanes Principal Travis Bell. Acalanes and the surrounding schools, including Springhill Elementary School and Happy Days Preschool, immediately entered into a lockdown at around 10:30 a.m., and remained that way until around noon.

“We immediately went into lockdown, after which the police apprehended both suspects over the course of the hour and a half that we were in lockdown,” Bell said.

The intruder on campus was detained in the boys’ locker room, while the other suspect was arrested in a nearby backyard, according to Lafayette Police Chief Eric Christensen. The suspects were later identified by law enforcement as Charles Parks and Jeremiah Mercure, both of Martinez.

According to Associate Principal Andy Briggs the suspects were not armed. However, the police found a knife in the car, but the weapon cannot be confirmed as a the suspects’.

Bell announced the lockdown on the overhead speaker, and teachers soon after received an email explaining the situation. Standard procedure requires staff members to lock all classroom doors and draw the blinds, while students remain silent and sit on the floor.

Freshman Quinn Finch was in the computer lab with his history class when the lockdown commenced.

“The teacher closed all the curtains and locked the door and then turned off the lights so it was really dark. Nobody had any idea what was going on, and it was really scary,” Finch said. “My teacher was really calm, and he was trying to get everybody to stop freaking out. He was trying to talk to people about how important  the situation actually was.”

While teachers secured their classrooms, law enforcement arrived on the campus thereafter, and sirens could be heard throughout the school. According to Bell, the law enforcement reaction to the threat was excellent.

“It was such an incredibly choreographed and coordinated effort by police from multiple precincts,” Bell said. “I’m guessing there was around 20 or 30 police officers here.”

Senior Sarah Miles was in the front quad when the suspect entered campus and witnessed police personnel pursuing the suspect. 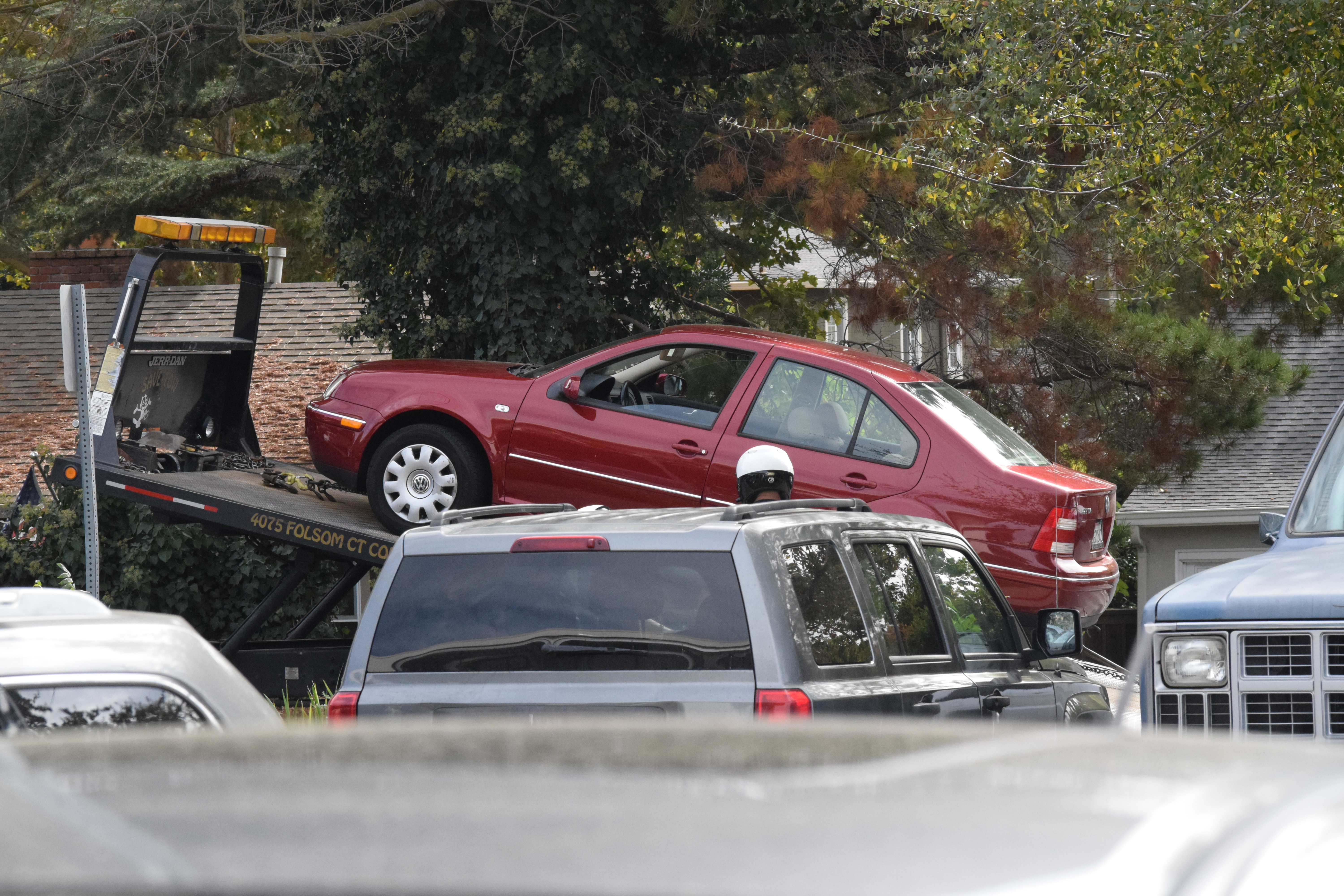 The red vehicle stolen by the two suspects was towed away by law enforcement after the Acalanes lockdown was lifted. (Blueprint Photograph/Claire Gallagher)

“I was walking from the front parking lot across the quad and I heard a bunch of sirens, so I turned around and this guy sprinted past the big gym,” Miles said. “He was wearing a flannel and a beanie and he had a small beard. Then a bunch of police cars sped really fast into the parking lot and one officer sprinted after him onto the field.”

Physical Education teacher Chris Huber had students on the field when the suspect entered the campus.

Sophomore Anna Green is one of Huber’s third period students who was on the field at the time of the intrusion.

“The guy ran through the area next to the gym and then behind the bleachers with the police chasing him. There were a lot of police that showed up after that. The PE classes were kind of just running around on the field, until a teacher waved us across and we sprinted to the Leadership room,” Green said.

K-9 units and  a police helicopter assisted with the search to ensure that the campus and surrounding areas were secure from any further threats.

After the lockdown was lifted, Acalanes proceeded as normal.

“We will absolutely proceed as usual through the school day and week. There really is no reason to feel at risk anymore. We are 100 percent sure that the situation is safe and resolved at this point,” Bell said.