It was sudden- for a moment, almost everyone was on the same page about something. It didn’t matter who you were, what you believed in, how wealthy you were, who you found attractive, or what color your skin was- because Milo Yiannopoulos finally managed to anger everyone and generate a collective disgust consistent with his otherworldly awfulness. It all seemed to come down for him. He lost his book deal, he stepped down from his position as an editor at Breitbart News, and found himself distanced almost equally from his beloved conservative and his hated liberal camps.

I’m referring to Yiannopoulos’ ‘recently-surfaced’ interview from January 2016, in which he discloses his experiences with sexual abuse by a priest as a teen. The interview -or the excerpts from it published to the web- make for a disturbing listen on multiple levels. From the seemingly-approving tone to the subject matter itself, Yiannopoulos’ interview was horrifying.

I despise Yiannopoulos and disagree with almost everything he says, but it seems to me that, as he later stated in his official apology, his quotes really were misrepresented. His claim that his comments were borne of the characteristic British ‘gallows humor’ and sarcasm seem valid. I don’t believe that Yiannopoulos was really advocating for pedophilia. Were the things he said during a conversation about having sex with underage males particularly sensitive or agreeable? No, of course not. Nothing Milo says, by his own admission, is sensitive or agreeable. The destructive riot which exploded in Berkeley last month in response to a planned lecture by Yiannopoulos is a testament to that fact. 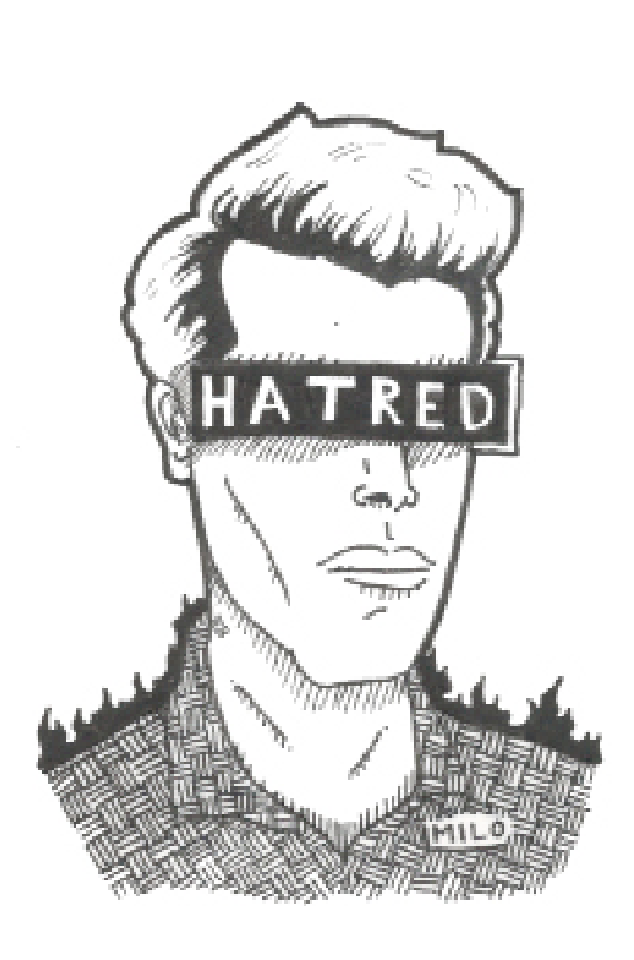 Watching his press conference, I found myself in agreement with him. I do feel the media coverage of his comments lacked the proper context, and that his statements were misconstrued. I felt, for once, Milo Yiannopoulos had shed his facade and said something truly genuine.

But if you think I’m about to advocate for him, you’re sorely mistaken.

Just because Yiannopoulos’ statements were misconstrued does not mean that he doesn’t deserve to find himself in the position that he’s in. Even if Yiannopoulos finds himself at arm’s length from the media and both sides of the political establishment because of comments that were misrepresented, he’s exactly where he needs to be.

Yiannopoulos revels in the degenerate and the obscene. He’s built an his career around spouting vitriolic poison, all under the guise of advocacy for free speech- but it’s all a facade. His carefully cultivated public persona is designed to provoke. A loudmouth. gay, ultra-conservative jew who speaks the truth that everyone’s too afraid to acknowledge?

Milo Yiannopoulos is an opportunistic troll filled to the core with racist, sexist, hateful acid. Or maybe he’s only an opportunist with a powerful flair for the controversial, who wants his fifteen minutes of fame. In any case, he’s seen a world in which decency has broken down. In that world he’s found stage upon which he can toy with millions and eke out every second of his fifteen minutes. The trouble is that he’s very intelligent. He knows perfectly how play off the awful things he says. He knows exactly how and when to break out his ‘free speech warrior’ shell and hide behind it, and it’s worked marvellously for nearly a decade.

Now, however, without even meaning to, he’s pushed so far that he can’t use his usual tactics to control the damage. Yiannopoulos stumbled into a conversation that everyone finds appalling, and it’s one that can never be discussed without the knee-jerk disgust that’s universally attached to it. Even if Yiannopoulos wasn’t advocating for pedophilia, or at least trying to normalize it- which he wasn’t- people have already made their minds up and turned their backs to him.

Make no mistake, I am not at all okay with the fact that so many people have misunderstood Yiannopoulos’ comments and blindly attacked him for it. But if the reality of the situation is a right-thing-for-the-wrong-reason one, and it is, I’m going to adopt Milo’s opportunism and make the most of it. I’m willing to play the pragmatist.

This is an opportunity for us Americans to show that we’re not going to tolerate having our standards eroded any more by false prophets who tell us they seek to ‘defend free speech’ and then belch hateful filth. Milo Yiannopoulos is not some modern-day Voltaire. His occasional legitimate statement or insight does not outweigh the sheer tsunami of hatred that he releases with regularity. There’s a way to fight for free speech that doesn’t require us to become degenerate bullies.

We can’t allow Yiannopoulos to ever ascend to the level of cultural prominence he possessed a few weeks ago. We can no longer give him a platform with which to ‘defend free speech.’ No more interviews, no book deals, no lectures- nothing. He should sink either into obscurity or the derogatory.

We have to reassert our desire to live in a decent society, and in that mission, Milo Yiannopoulos and his ilk are the enemies.