Who doesn’t love a hunk in a dazzling gold suit crooning to swooning masses of teenage girls?

Through pristinely sweet soprano lines and bass parts that caused the very stage to tremble, Bye Bye Birdie hit all the right notes. Running from March 2 through March 4, Acalanes’ spring musical transformed audience members into girls hoping to be ‘pinned,’ guys looking for their ‘steady,’ and parents shaking their heads at the trends of the day.

The year is 1958 and the talk of the nation is the coming departure of teen sensation Conrad Birdie (Cameron Beattie) for the army. As agent and songwriter Albert Peterson (Conrad Rocha) finds himself lose his rock star to the draft, he scrambles to create one last moment in the limelight for Birdie. Secretary-turned-sweetheart Rose “Rosie” Alvarez (Michaela Sasner) suggests “One Last Kiss,” both a song as well as a smooch for a lucky fan. Enter Kim MacAfee (Lauren Ramlan). Kim, who was recently ‘pinned’ by her new ‘steady,’ has vowed that she is over Birdie despite her former position as fan club president, but agrees to the kiss. 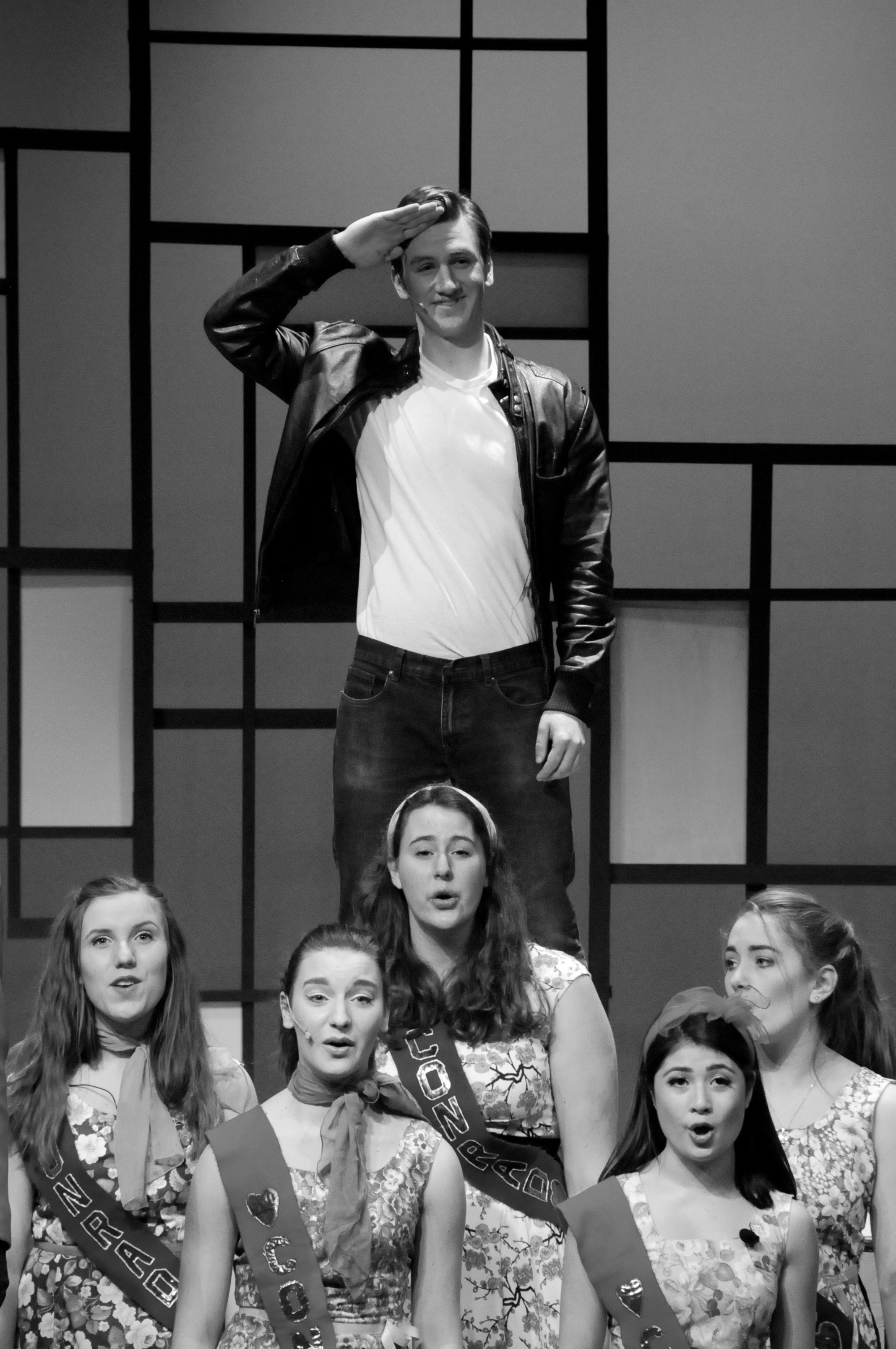 Fifties-style fit and flare dresses, with a wide variety of colorful patterns, flitted across the stage past straight pantsuits and varsity jackets. Wardrobes changed into more confident ensembles as the plot progressed, reflecting significant character shifts. Each costume explicitly indicated its character’s role in the musical, whether its wearer was part of the vibrant ensemble or was the studded rockstar of the show.

While the fluttering fabric patterns of the fangirls’ dresses danced around the stage, each of the large, colored boxes that made up the set stood behind the performers as a multifunctional representation of 1950s culture. The boxes were each painted a different bright color and served as platforms, second stories of houses, walls, and tables, among other things. The wooden structures displayed the societal ‘boxes’ that each character was struggling to fit into or escape from.

The boxes, though minimally intrusive, also allowed the performers to use the stage in ways that conveyed elevation in social standing as well as importance of opinion. The color-blocking of these structures added to the general ambiance of the scenes and contributed simplicity to an otherwise complicated web of emotions.

As a beautiful tribute to Elvis, the musical’s inspiration, Beattie’s voice perfectly captured the heartthrob tone of 50s pop culture and threatened to dance away any girl in earshot. Beattie’s version of “One Last Kiss” was possibly even better than Jesse Pearson’s rendition in the movie Bye Bye Birdie, made in 1963.

Another voice with clear tone and smooth pitch was Ramlan’s. Especially in Kim’s “How Lovely to Be a Woman” song, Ramlan hit the high notes with a precise clarity and sweetness that sent chills through audience members.

The comic relief to the seriousness of the other characters came in the form of Mrs. Mae Peterson (Fiona Warburton), who sarcastically proclaimed herself to be “a mother [who] doesn’t matter anymore” through song. Warburton perfected the New York accent as well as the attitude, waving her heavy fur coat at anyone in her way.

Mae’s son Albert and his sweetheart Rosie make a perfect duo; the two started as associates but became a classic pair of lovebirds. Their connection was challenged by multiple forces including Mae, but their affection proved mightier than any challenge. With each song they drew the audience closer and closer into their relationship as the characters themselves grew more invested in it as well.

Kim’s two complementing characters Hugo Peabody (Brian Ohleyer) and Ursula Merkle (Claire Levinson) served as perfect levying forces against one another in terms of encouraging Kim one way or another. Both Levinson and Ohleyer channeled accurate portrayals of teenagers and were the most relatable personalities on stage. 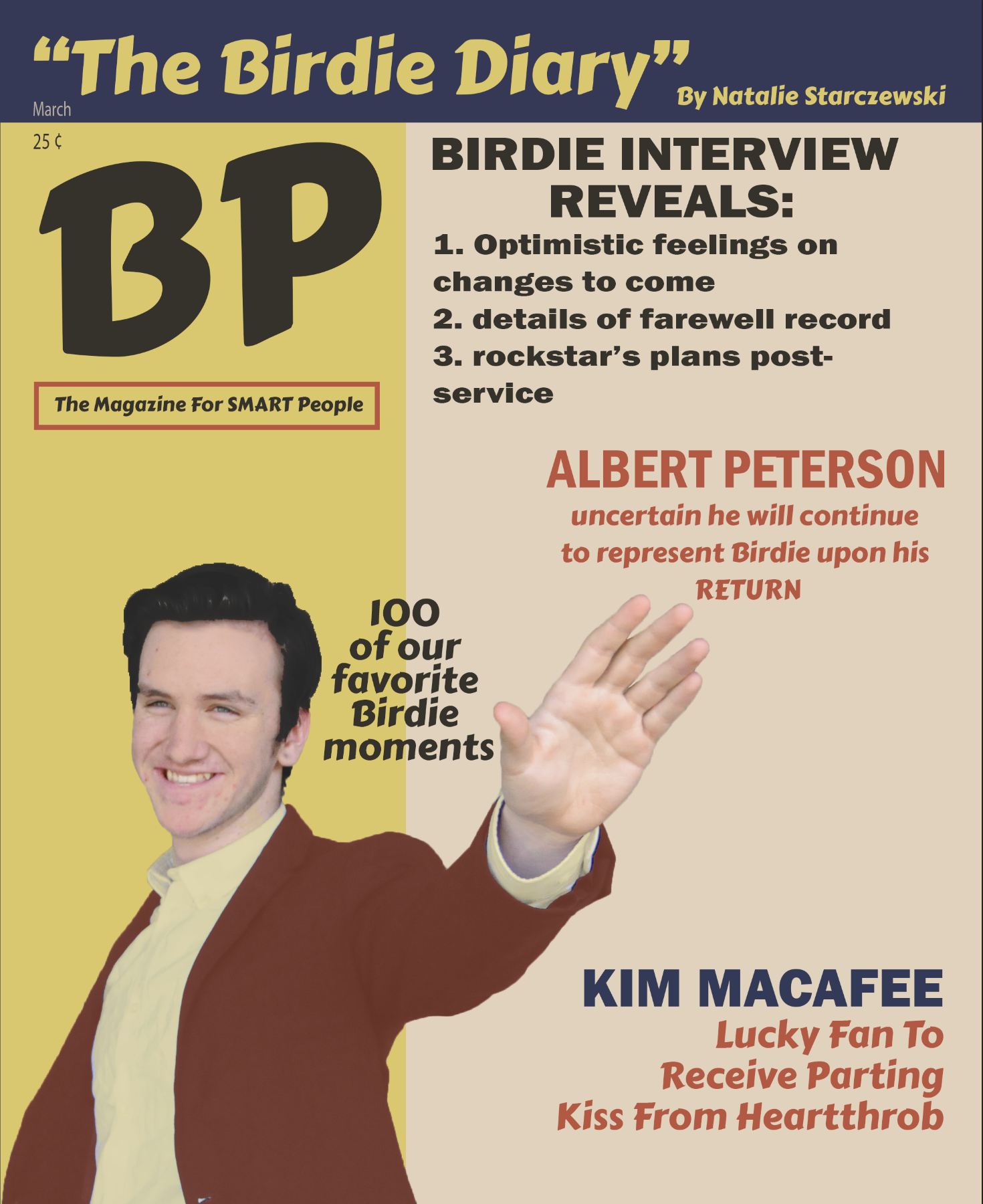 As the cast’s acting swaddled those sitting in the theater in the story of the musical, the pit orchestra finished tucking them in with transitional music and additions to the mood and joy of the show. The student musicians played their notes with clarity and precision and were not lost in the background as many orchestras can be. Perfectly timed bells, strings, percussion, and wind sections intensified the moods and themes, and the pit’s immaculate rendition of the original score spotlighted many musical talents of the student body.

The musical allowed Rocha to double as both an actor and student choreographer. His perfectly graceful routines were simple enough for inexperienced dancers to grasp yet  displayed complex storytelling elements for those who were more practiced performers. In particular, Ashley Wu’s scene used movement instead of words to portray a transition from a childishly timid girl to an open and happy young woman. Tap dancing also was a smooth addition to the play and seemed natural for Rocha and those involved. Each style of dance was thoughtfully intertwined with the auditory and verbal parts of the musical and was incorporated smoothly to showcase the multifaceted talents of the cast.

On March 2nd, the opening night of the show, junior Anna Cain volunteered to learn one of these dance routines due to the absence of a ballet corps member. The show would not have been complete without her efforts.

Senior Cameron Burrill’s thoughtful and meticulous direction tied together each individual piece of the production. Every element of the acting, music, and movement was painstakingly deliberate and spoke measures about themes and emotions under the stage lights. Even those unlit by direct spotlights were clearly portraying dynamic parts of the scene as opposed to just reacting to the main characters, and each performer had their own purposive storyline to follow.

Perhaps the only part of the musical that could have been improved was the sound during the second act. Voices were uneven across microphones and at times hidden or too loud to flow seamlessly. Silences meant to be dramatic were replaced with a buzzing speaker noise, which proved to be distracting.

Despite such distractions, the tech, lighting, sound, and production crews each did a fantastic job overall and now have one more enthralling musical under their belts. Producers Bruce Lengacher and Ed Meehan provided another successful performance and showcased student talent in a charged piece that imparted a sense of nostalgia to those in the theater seats. Like each of the DramaDons’ performances, Bye Bye Birdie was met with an enthusiastic standing ovation.