Student politicians decorated the hallways of Acalanes with vibrant posters and clever slogans, many sporting buttons and other attire to catch the eyes of potential voters during the month of March.

Acalanes students exercised their right to select student representatives in March by electing fellow classmates for positions of student council for the 2017-18 school year.

Candidates filmed campaign videos that were sent out to the student body on March 20. Students were then able to vote for candidates in their respective classes, as well as in the ASB category. Voting closed on March 23 at 3 pm.

Owen McNamara, Sophia Scipi, and Maggie Curless were named sophomore, junior, and senior class presidents. The elected Vice Presidents are Lauren Kobashigawa for the sophomore class, Sarah Westergren for the junior class, and Jamie Wendt for the senior class.

Current freshman Riley Nicosia, sophomore Audrey Glosson, and junior Samantha Darin were named secretaries for their respective classes. Class treasurers for next year will be Aly Sweeney for the sophomore class, Vanessa Urbina for the junior class, and Bella Wentzel for the senior class. 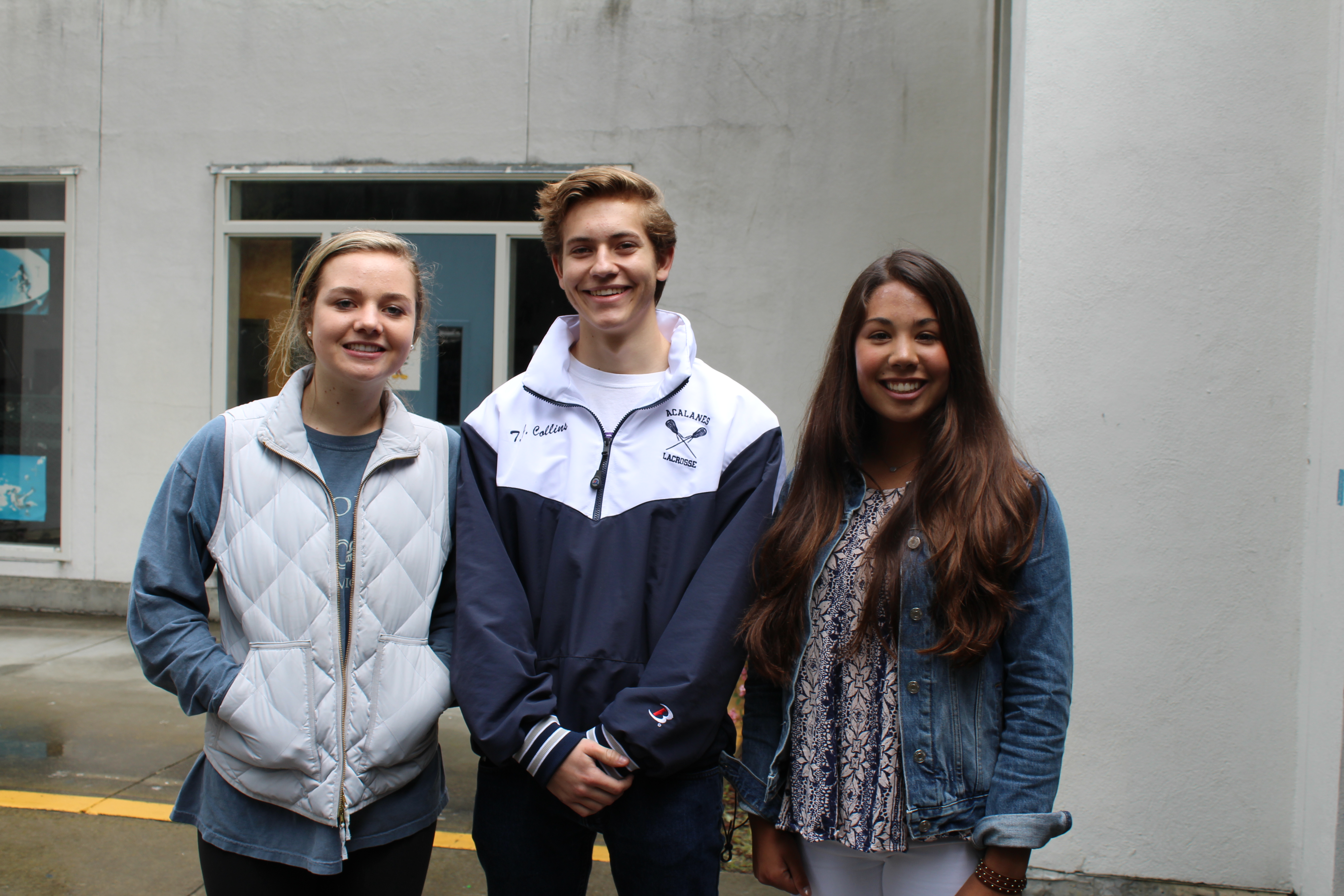 Nerves were high as the reveal of the election results grew near, and many of the class officers-to-be felt relief after their victory.

“I was overjoyed when I found out [I had won] and felt that all my hard work paid off,” senior class President Maggie Curless said.

“When I found out, I was relieved. Campaigning wasn’t easy work. Winning put an end to it all and a smile on my face,” Collins said.

The young politicians all had different motives for running in the class elections.

“It’s always been my dream since my freshman year to be ASB president, and when my sister became ASB president my sophomore year, I knew I had to run for the school, for myself, and for the Collins legacy,” Collins said.

Collins isn’t the only one who ran for office to follow in a sibling’s footsteps.

“My sister was ASB Vice President and I saw all the amazing work she did so it got me interested in the position,” junior and ASB Vice President-elect Natalie Elliott said. “Also, after being in leadership for two years I saw the change ASB can bring and how these positions can bring the school together. I think these positions are such an honor to have and I am grateful to be given the opportunity to be an ASB officer.”

Others chose to run for office in order gain experience in a position of leadership.

“I chose to run for president because I have always enjoyed taking on leadership roles and I wanted to challenge myself by taking on bigger projects,” junior class president-elect Sophia Scipi said.

The new officers have expressed hopes of bringing great things to Acalanes in their positions of power.

“I hope to make Acalanes an enjoyable place where people feel recognized for all their amazing accomplishments,” ASB secretary-elect Katrina Lee said. “I want the students to feel accepted and filled with school spirit and the general feeling of pride to be a Don. I want this year to be the most fun year yet.”

Other officers also feel that school spirit and pride will play an important role in their actions as school officials.

“I hope to bring a sense of community throughout the class of 2018 and want to make sure all the students feel like they have something to contribute to this school. I hope to make our senior year unforgettable and enjoyable,” Curless said.

The new leadership will likely bring new events to the school, according to Elliott.

“I hope to bring new events to Acalanes, especially involving clubs, as I will be working closely with them next year. I think we have so many amazing clubs that should be recognized,” Elliott said. “I want to make sure the student voice is heard in many of the decisions we make as a leadership class and make sure the students are informed about changes we bring about.”

Nearly 70 percent of the freshman, sophomore, and junior classes voiced their thoughts by voting. Seniors were excluded from the vote because it does not affect them. Some students who voted, such as sophomore Alex Young feel that it’s important for students to exercise their right to vote and choose their own representatives in the high school setting.

“It’s important [to vote] so that we have a voice to represent our opinions about the school,” Young said.

Elliott also feels that voting for school officials is important because the students they as officers represent the whole student body.

“I think it is really important for students to express their right to vote because the people who hold these positions will be the representatives for the rest of the student body,” Elliott said. “By voting, the students have a voice in what happens on campus.”

With a fresh batch of leaders eager to bring great things to Acalanes, it’s safe to say that students can expect great changes to come.

“I want to have a positive influence and hope to make Acalanes a more spirited environment,” Scipi said.