With the continuous flow of students aiming to attend a four year college, a common roadblock they face is choosing between the Scholastic Assessment Test (SAT) and American College Test (ACT).

The SAT and ACT, created in 1926 and 1959 respectively, are academic tests that allow colleges to assess a student’s ability to succeed in college. These tests are often analyzed in conjunction with a student’s high school grade-point average (GPA) and extracurriculars.

After the SAT adopted drastic changes in 2016, these statistics will likely shift, but the College Board and ACT company yet to release any statistics. 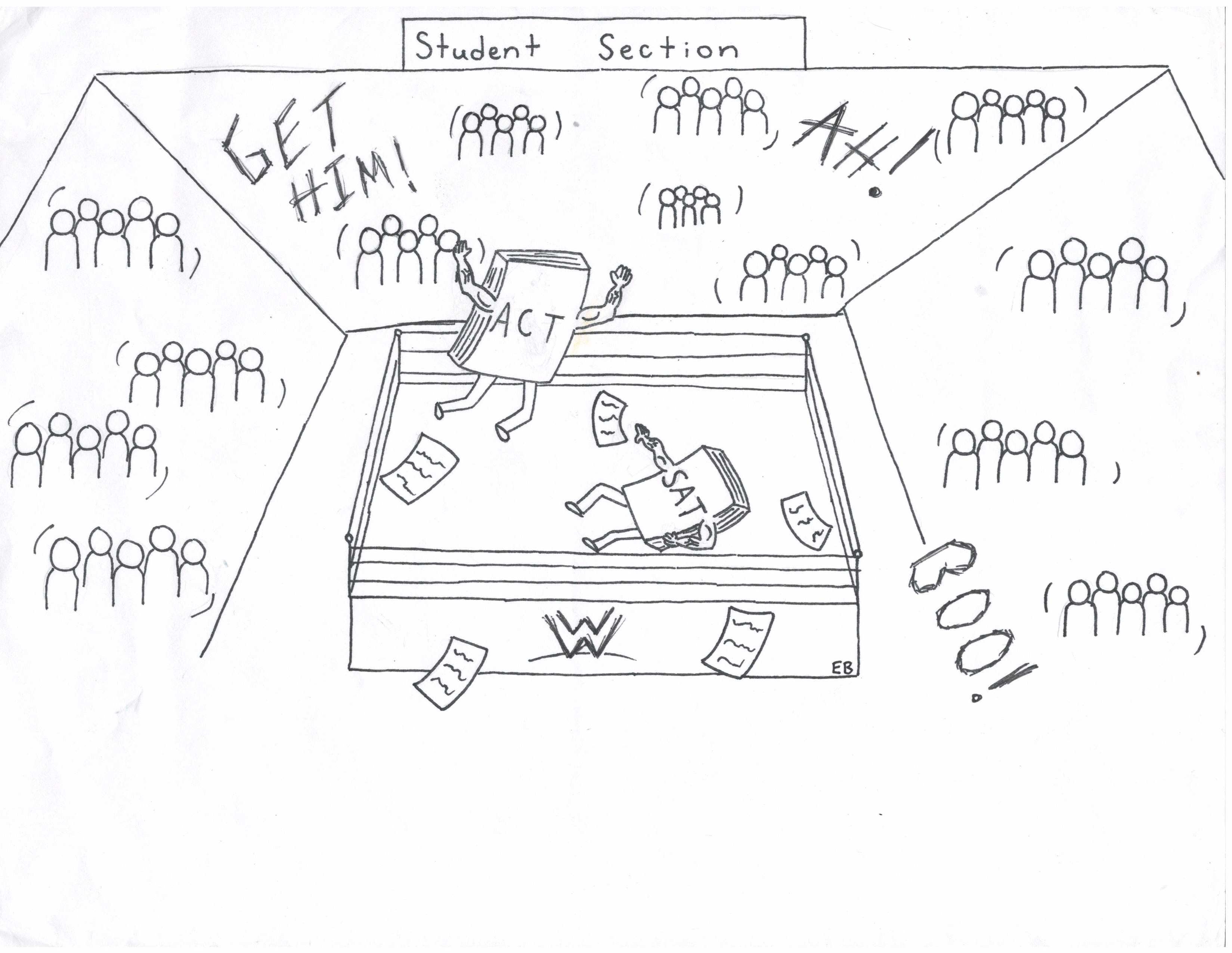 Although very similar in purpose, the tests have a variety of differences that make choosing between the two a difficult task for many students.

“Typically what I recommend is for students to take practice exams, compare their scores, and see which one they do better on,” Acalanes College and Career Counselor Ginger Jessop said.

Many Acalanes students have taken this advice into consideration when deciding which entrance exam to take.

“I took the [Preliminary SAT (PSAT)] and the practice ACT. My ACT score was worse and my SAT score was better,” senior Thomas Edwards said. With these results in mind, Edwards’ decided to take the SAT.

The SAT consists of a Reading, Writing and Language, Math, and optional essay portion. The test runs for three hours and 50 minutes including the essay, and three hours without. The math portion of the exam covers arithmetic, algebra I and II, geometry, trigonometry, and data analysis, with restricted calculator use on certain problems. Students receive a score on a scale of 400 to 1600. The ACT, meanwhile, runs for three hours and 40 minutes with the optional essay and two hours and 55 minutes without. The scoring system for the two tests differs greatly, as the ACT scoring scale ranges from one to 36.

The ACT has distinct similarities and differences to the SAT. While both test English, math, writing, and reading skills, the ACT also includes a science portion.

“The science section on the ACT isn’t really testing your knowledge of biology, chemistry, and physics. Instead it’s testing how you read charts and graphs, analyze data and that type of thing. With a little bit of practice you can get really good at the science part,” Jessop said.

For some students the additional science portion is the determining factor when it comes to choosing between the two tests.

According to C2 Education Center Director Julie Kim, who oversees the standardized test preparation and tutoring company, the idea that one must excel at science in order to take the ACT is a common misconception among most high school students.

When choosing between the two tests, many look at their individual academic capabilities to see where they line up on the two contrasting exams.

Jessop also feels that the better option of the two depends greatly on each specific student.

“I think some students may do better on one than the other. The ACT is a little bit of a faster pace and there’s more breaks,” Jessop said. “The SAT has certain reading sections that require a lot of focus, so a student who struggles with focusing for long periods of time or reading a lot of text may not do as well on the SAT as they would do on the ACT.”

When deciding between the two, students are often concerned with what colleges want to see. While the impact that SAT and ACT scores have on a college application will differ among schools, the overall purpose of the test is relatively universal.

A majority of colleges have no preference when it comes to the ACT and SAT.

“The SAT and ACT are viewed equally by college admissions representatives,” Jessop said. “Colleges will accept either one and they don’t have a preference over one or the other.”

However, many schools value a student’s grades and performance throughout high school over their ACT and SAT scores. Jessop experienced this first hand during her time as a college admissions officer for the University of California, Los Angeles (UCLA) before joining the Acalanes staff.

The University of Arizona supports this concept as well. In fact, the school believes so much in the significance of grades that they do not require SAT or ACT scores for all but three of their programs.

“Decisions have been made by the department that grades are a better indicator of how someone will do in the program than a one-time, one-day exam,” Regional Manager of West Coast Admissions for the University of Arizona Naomi Schoenholz said.

Once students decide between the tests, they are also tasked with choosing how to prepare for the exam. It is common to get outside help from online sources, tutors, or local preparatory classes. The study strategies for the two tests often vary, according to Lafayette Academy’s Cannell, due to the differences between the two tests. One example is the sharp contrast between the SAT’s challenging essay and the ACT’s easier one.

With SAT and ACT exam scores weighing into college admissions, it is important for students to use knowledge gained throughout their high school career to these standardized tests.

This brings up the question of if Acalanes thoroughly prepares students to succeed to their fullest potential outside of high school and perform to their highest capabilities during tests independent from high school.

“I think if Acalanes offered more ACT or SAT prep classes that focus on what both tests actually contain it would be a lot more helpful. A lot of it is actually stuff we learned in the past. I think if they review over that stuff it’d be better,” senior Callista Asuncion said.

Regardless of the differences between the SAT and ACT, it is important to remember that the tests make up just a small sliver of the college admissions process and that no score is make-or-break.

“A shard in a mirror does not give you a complete picture, and I’d say the SAT and ACT are just a part. I think it’s a nice peek at what your potential is, but you shouldn’t ride your whole academic career on it,” Kim said.