// As a five year-old, I never asked where babies came from. At the time, I did not concern myself with those type of details. I was more preoccupied with my “Oreo Cookie Counting” book. Since I didn’t ask these questions, I never heard the nonsense parents generated to mask the truth: storks, the birds and the bees, or some other solution.

Instead, the truth started to reveal itself by age ten. My parents are both in the medical field; my dad is a doctor, while my mom is a nurse. By the time I entered the fifth grade, dinner table conversations covered the reproductive system, and the raging hormones my sister suffered through, of which my dad had superior knowledge. Ten year-old me was mortified. 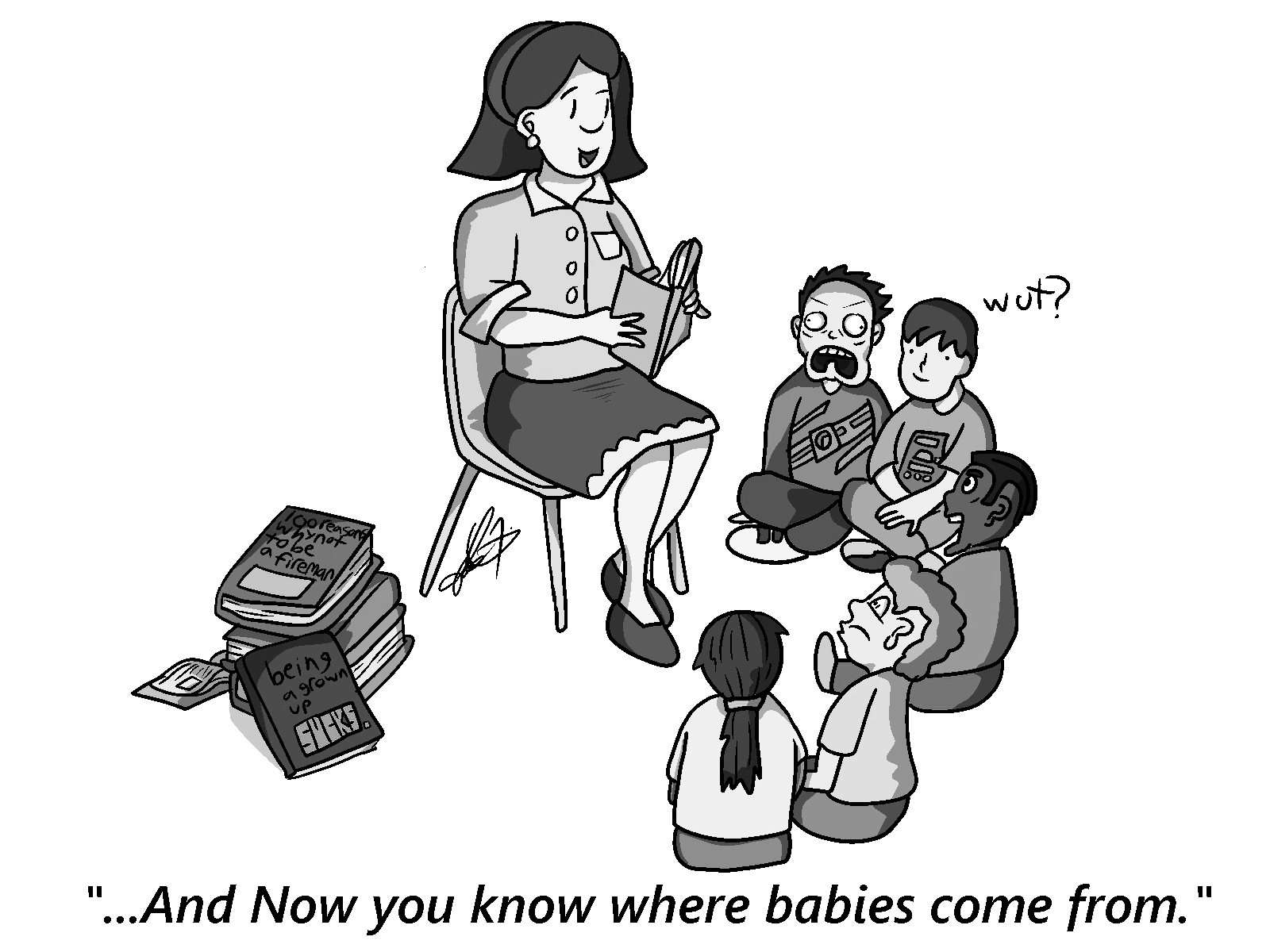 I thought I could shield myself from these subjects until later. I wasn’t “ready,” nor was I eager to dive into the subject of puberty. I figured I’d find that out for myself in due time. I hovered in an uncomfortable zone between what I was experiencing at the time and the awful things I was going to experience in a few years. The problem was that I wanted to cover my ears and learn nothing, even though some knowledge would have benefited my growing mind.

These situations help us grow, no matter how uncomfortable they initially make us feel. Encountering cringe-worthy situations or people is inevitable.    For me, the inevitable meant premature sex discussions. For others, the same is probably not as relevant.

From those hours of dinner conversations, I didn’t realize that exposure is healthy. It took a few years for my mindset to shift.

In sophomore year, my ego inflated. I thought I knew everything I needed to. Freshman year was behind, and being a sophomore meant being wise, didn’t it?

Yet my mind betrayed me.

It started with the first step into my sixth period Contemporary Issues class. Strong opinions and animated characters, whom I still pass in the halls, filled the scene, people like the sharp-tongued girl or the blue-eyed boy who snapped at one another until they argued into oblivion, leaving the rest of the class with eyes rolling. When History teacher Brian Smith passed out the syllabus and we started discussing heavy topics, I sat unfazed as if I was familiar with abortion, gun control, and the death penalty.

When we delved further into areas involving cocaine addicts and the Columbine shooting, I then found myself lost. These kinds of things make people’s stomachs turn, and with good reason. Most people want to get rid of the uncomfortable pit in their stomachs when discussing topics like these, and I was no exception. I was not unfamiliar with what I heard, but I had created a disconnect between my reality and the realities of the subject. The only times I even somewhat listened were when my mom turned on the news, and even then, it was as if the news happened to other people, not affecting me. Instead of even considering these problems, I blocked them out completely.

We watched multiple movies and documentaries in Contemporary Issues, and the more we did, the more I realized how much I hadn’t been exposed to. When I compare this year to last year, I wonder how I’d feel if I hadn’t encountered a few harsh concepts before. The past year alone introduced unpleasant events with fresh headlines everyday. School presents some of the same topics.

In English, we have read several novels and plays–Sula, Light in August, One Flew Over the Cuckoo’s Nest–that touch upon issues of rape, sexuality, race, and death. Whenever we discuss sensitive subjects, at least one student is staring at the floor or twiddling their thumbs to distract themselves from what they are hearing. It is impossible to avoid what is already there, and even omitting undesirable portions will not distract from its existence.

Although having knowledge on these types of subjects can be unpleasant, receptiveness is a fair exchange. Instead of just hiding under the covers, people learn these conflicts exist and can figure out how to talk, think, or deal with them. Instead of remaining inside of a bubble, the world opens up just a little.

It is probably much more inviting to meander through life, avoiding the hardships of the world, but it is irresponsible. That is not to say that everyone should go around worrying sick about World War III, or when the next plague will hit, but having some kind of grasp on the outside world will not cause any harm.

You cannot keep a kid safe forever, and it may be better to let them learn ahead before they are thrown into a world of unknown. That would be even more damaging.