// While the new paper towel dispensers appear to be an upgrade, many students doubt they bring any improvement to the student bathrooms on campus. Over the summer, paper towel dispensers across the district were replaced with automatic ones. Intended to improve the quality of Acalanes restrooms, the high-tech dispensers have proved to be more of a hassle than anticipated.

The new dispensers aren’t the only thing that’s changed–the district maintenance personnel added new soap dispensers and air fresheners as well. Prior to their replacement, each of the 10 bathrooms contained two to three manual paper towel dispensers, along with outdated soap dispensers.

Cost of the new dispensers was not immediately available, according to district maintenance staff.

With the transition to automatic soap and towel dispensers, the district decided to implement a new and ‘improved’ restocking system. In previous years at Acalanes, the custodians had replaced the paper towels, and while the rolls occasionally got stuck, many students never encountered one without any towels in it. With the new system, private company Cintas restocks the towels, creating a larger problem for Acalanes students. The company promises to restock the dispensers every Thursday, but shortages imply otherwise. In just two days, students often use up the provided rolls. Sophomore Stephanie Liu said the paper towel dispensers are “great–if they had any paper towels inside of them.”

According to sophomore Daphne Ganter, she has experienced trouble with paper towels more than 10 times in the four weeks they have been installed. Ganter is one of the many students forced to resort to drying her hands on her clothes or air drying them.

The problem, Head Custodian Francisco Lopez said, is that Cintas underestimates the amount of paper towels needed each week. While the company comes every Thursday, Acalanes students use up the towels faster than they are restocked. 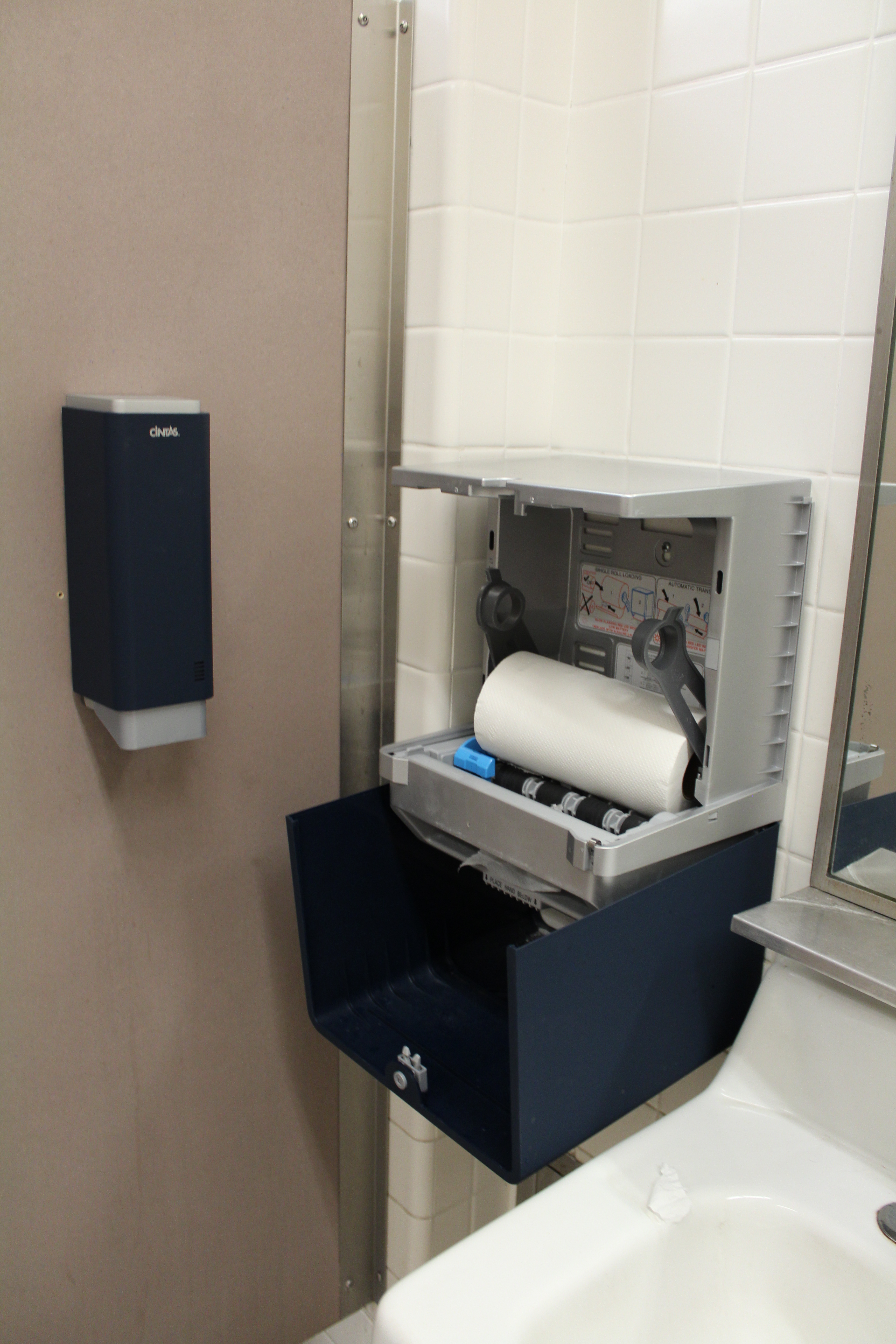 ““That is going to be a dual effort, when we are there on Thursdays we’ll do the best that we possibly can to restock the dispensers that we can gain access to,” Cintas Service Manager Jeff Anderson said.

Sometimes accessing women’s restrooms and classrooms are more difficult, but Cintas is able to hit the most popular bathrooms.

Working with the AUHSD custodians, Cintas also worked out a solution to fix the shortage of paper towels in many of the dispensers.

Lopez believes having extra paper towels will bring an end to any paper towel shortages that students previously encountered. Admin seems equally as optimistic, and hopes the system will reduce the amount of paper towels used.

“I imagine that there’s an element of the motion-sensored paper towels to probably decrease the amount of paper that is used, because some people just pull and rip a bunch off,” Acalanes Principal Travis Bell said.

Unfortunately, many students share the opinion that the new paper towels are too small and thin. Sophomore Jared Solomon said he’s “seen people use six or seven at once.”

With the old dispensers, people could choose the amount needed. Now all it takes is a swipe of the hand to waste more and more paper. Many people see no choice other than to use multiple sheets.

“You need a longer length, because you can only dry a finger,” sophomore Isabella Salinas said.

Surprisingly for Acalanes students, the problem appears to pertain to Acalanes alone. At both Miramonte and Campolindo High School, students regularly enjoy the dispensers, admiring their look and eco-friendly features.

“I think that students are pretty indifferent about the change to the new dispensers, but some are happy because they are much cleaner and limit the amount of paper wasted,” Miramonte junior Gracie Guidotti said. “They are refilled pretty often and I have not found them to be empty.”

At Campolindo, the experience is equally as positive. According to junior Dalilah Wiseman, the paper towels are constantly replaced, and few students experience any difficulties. She did, however, remark that the new addition creates unnecessary lines.

“Since the dispensers only give out a small sheet, it holds up the line when you need more than one sheet,” Wiseman said.

Experiences at Acalanes with the new dispensers haven’t been all negative.

“I like the new paper towels. They’re pretty convenient, and you don’t have to take as many,” sophomore Thomas Judson said. Judson is one of few complementing the new system. Until Cintas and janitors find a way to work together to restock the dispensers, students will continue to find flaws within the bathroom.

“The idea was great, but the thing is there are so many run-outs that it doesn’t make that much of a difference,” Liu said.