// A typical Sunday morning at Acalanes doesn’t usually consist of the Leadership class bombarding students with an array of brightly colored pigments, creating dust storms of rainbows, and leaving a trail of powder in their wake.

On Sept. 24, Leadership hosted its second annual Color Run as a fundraiser for the classes of 2019 and 2020. Runners and walkers of all ages gathered on campus to compete in a friendly, color-filled competition consisting of a one and a half mile route around the campus. Beginning at the football field, participants looped around the track before following a path around the school to the main parking lot. 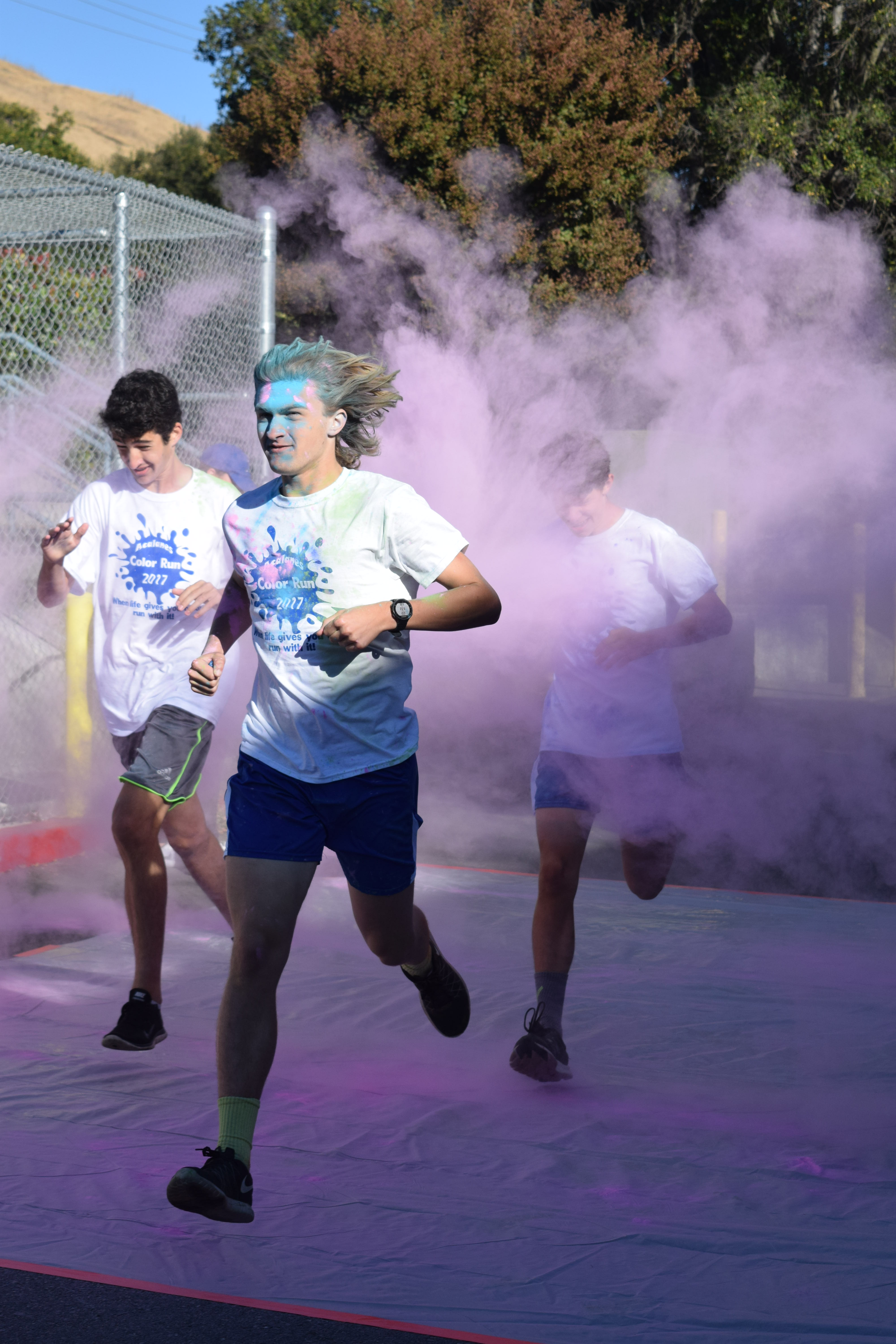 “The color run was super fun. I ran it with one of my close friends and we had a blast,” junior Nicole Edwards said. “The atmosphere was really energetic and positive, and there were a lot of students from Acalanes and other school with their friends. The run wasn’t competitive, but it was fun hanging out with friends.”

The race attracted 240 runners, choosing to spend their day covered in colors. Sophomores and juniors benefitted directly from the run, racking up more than $6,000 with help from sponsors like A Runner’s Mind, Sports Basement, and Urban Remedy. A clear success, the Color Run wasn’t so easy to prepare for.

“We were quite concerned in the week leading up that we would be short of our goal for the number of participants,” said Sophomore Class President Owen McNamara, “but I think we ended up close to the number we were shooting for.” He helped spearhead the event alongside junior class officers and liaisons.

Planning began two months prior, including discussions of sponsors and possible routes for the run. Class officers focused largely on publicity, hanging posters and flyers with the hope they might attract more runners.

Heading into the race that Friday, only 180 Lamorinda students and families had signed up for the race, mostly in elementary school.

“I think if we had more [Acalanes students] it would be great, but if not I still think it’s a fun event that raises money for the classes,” Acalanes Principal Travis Bell said.

On the day of the race, 41 additional participants signed up to take that number into the 200s, the goal many officers had aimed to reach. Some of those sign-ups included Acalanes students.

“The real MVP’s of the Color Run were the sophomore and junior parent liaisons who did all the heavy lifting, and who deserve a major round of applause for being able to put together such a wonderful event,” McNamara said.

Leadership students arrived as early as 7 a.m. to help set up for the race. Most popular among volunteers included throwing color at participants. Volunteers additionally prepared food, hung balloons, and directed the course.

“It was great getting to help other people have a good experience at one of our school events and getting to be a part of the year’s Color Run,” junior Leadership student Tucker Jeveli said. “The throwers were taught what to do ahead of time and it was a fairly simple task. The people in my throwing group also got to practice tossing powder on each other right before runners began the race.”

Following the event, students easily cleaned up the powder and surrounding posters. Custodians later helped to clean up as well.

“Cleanup was not too bad because the colored powder we used was made of cornstarch which is biodegradable, meaning we didn’t have to go out and sweep it all up, making that part of it much easier,” McNamara said. “The rest of the cleanup was not bad at all. It was basically just putting away tables and equipment.”

Many reflected positively on their experience, signalling a win on the parts of the class officers and parent liaisons, and hope to see more high schoolers attend next year.

“I will definitely do the color run next year since I will be a senior and it will be my last year at Acalanes. I also did the Color Run last year, and they have all been super entertaining and fun so far,” Edwards said.