// “Net Neutrality” is the kind of phrase that can instantly put you to sleep.

It’s like “Cross-Price Elasticity of Demand” or “Synergistic Strategic Alliance” in that it seems deliberately designed to bore you.

This is a problem because Net Neutrality is vitally important and we need everyone paying attention to it.

Every American should know what it is and should care about its impending dismemberment at the hands of delusional corporate puppet and FCC chairman Ajit Pai. But before getting lost in the weeds of the issue, Net Neutrality first has to be explained.

At its core, Net Neutrality is the principle that all governments and Internet Service Providers (ISPs) like Verizon or AT&T should adopt a hands-off approach to the internet. They cannot interfere with or prioritize any data on the internet over another. It’s a vital component of how the internet operates and distributes information and services. 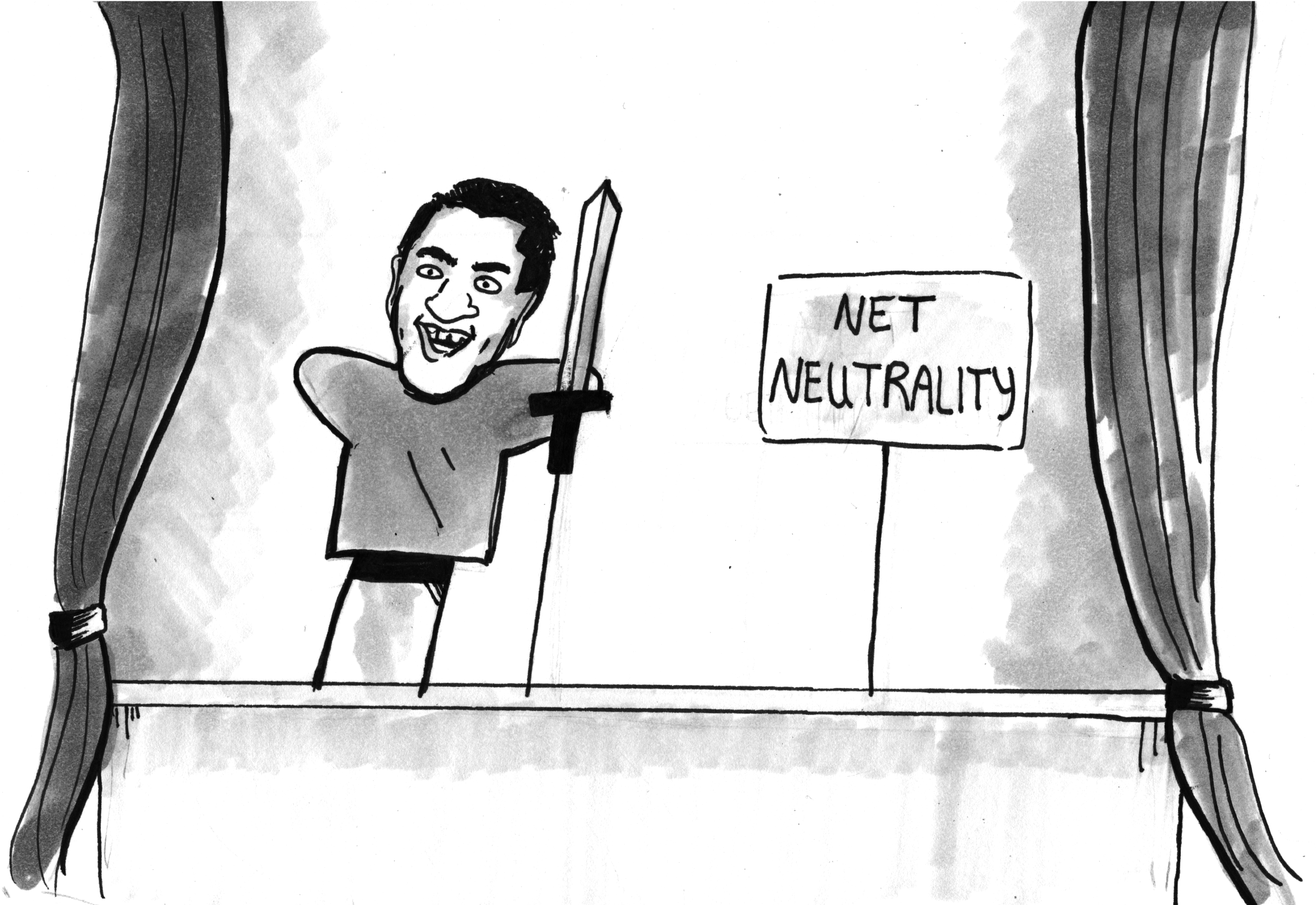 To simplify, Net Neutrality is what enables your vegan aunt to run her health food blog and enjoy the same access to users through her website as mega-corporations like Apple. Without that neutrality, ISPs could charge websites for speedy access and intentionally slow down the service to websites that can’t pay those fees. That’s called throttling, and it means you’ll enjoy lightning-fast connection speeds while buying the iPhone X online, but if you try and access auntie’s new recipe for a Mushroom-Quinoa Burger, you’ll be left waiting.

Killing Net Neutrality would also allow ISPs to charge consumers more for access to certain websites. For example, given Netflix’s incredible popularity, Verizon could conceivably charge you extra on top of your internet service for the ability to binge “Stranger Things” and “Friends.”

The list of creative ways for ISPs to rob you blind is extensive. Make no mistake that AT&T, Comcast, and Verizon will happily pursue emptying your pockets, and Chairman Pai’s arguments that consumer protections will remain in place are as valid as his claims that Net Neutrality is killing innovation, which is to say not at all. It’s a bald-faced and cynical lie—as is the claim that ISPs have “promised” not to slow or block content and data. We’re expected to believe that impermanent and amorphous concept of a promise protects consumers as effectively as federal law. The threat to dismantle Net Neutrality is the most cynical and naked cash grab in modern history. There is absolutely no well-reasoned rationale for doing away with neutrality protocols.

The elimination of these internet protections would be absolutely catastrophic. Allowing Chairman Pai’s FCC to murder neutrality laws would turn the United States into a semi-dystopian corporate dictatorship where our access to information and the web is at the whim of the likes of Verizon and AT&T. Allowing Chairman Pai’s FCC to murder neutrality laws would enable an administration already hell-bent on silencing dissent to control the one arena where it can be voiced most easily. Allowing Chairman Pai’s FCC to murder neutrality would jeopardize the free market and allow ISPs to dictate the economic fortunes of companies large and small. It’s a fundamental threat to our democracy as much as it’s a threat to our comfort, our economic success, and our wallets, which is why the public reaction of late has been so furious. This is an issue that extends beyond political aisles because in the end Republican and Democrat alike will suffer without the protections of a free internet.

Once Net Neutrality is dead, there will essentially be no reviving it. Its destruction will permanently alter the way we interact with the internet for the worse. So now I have a concrete call to action for you. If Ajit Pai isn’t stopped, your life is going to change drastically. You may not realize it at first, but you will eventually, and unless you’re an ISP executive or Mr. Pai, you’re not going to like the coming changes.

We’re on the verge of having our freedom stolen from us by greedy vultures and being charged for the privilege. But you can fight Ajit Pai for your right to an impartial and fair internet right now. Go to http://www.battleforthenet.com or call your representatives and senators. Take the time to actually fight for Net Neutrality, because whether you realize it or not, it’s well worth your time to stand up to Pai and his corporate masters.

One Reply to “Digital Disaster: Net Neutrality and its Impending Death”