// Many Acalanes students can remember watching “Finding Nemo” when they were younger. But for senior Jeremy Ridge, the memories go beyond Dory or Marlin, as he can hear his own father, David Ridge, playing in the film’s score.

“Finding Nemo” isn’t the only iconic film David Ridge has made an appearance in. As a professional musician and bass trombonist, Ridge has also played in scores for movies such as “Seventeen Again,” “Jurassic Park III,” and “Spy Kids.” You can also hear him in movie trailers for “The Da Vinci Code,” “ Up,” “Rio,” and “Pirates of the Caribbean III.” Ridge even extended his expertise to the video game realm, making debuts in soundtracks for video games such as “Halo,” “Star Wars: The Force Unleashed,” “God of War 3,” “Gears of War II,” and “The Simpsons Game.” Venturing out of the technical world, you’ll hear him in commercials for Little Caesars, KFC, and Burger King.

Additionally, Ridge has made his mark on Broadway and beyond, touring nationally with Tony-winning musical “Les Miserables” and critically-acclaimed “West Side Story.” Ridge has also performed at many of the major music festivals in the United States and abroad. 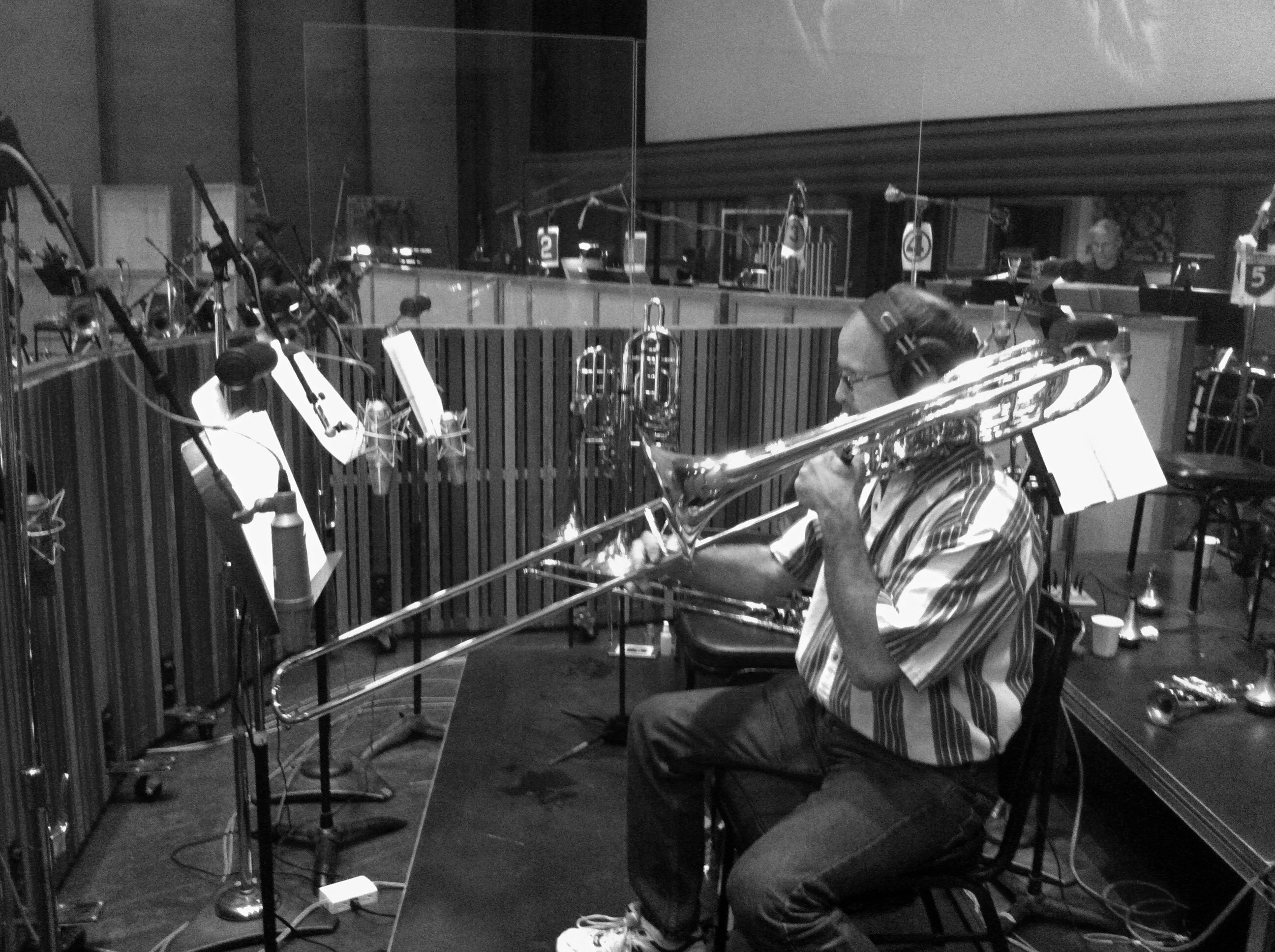 David Ridge, father of senior Jeremy Ridge a coach for the Acalanes wrestling team, in a recording studio. Ridge’s music has appeared in the soundtracks of major motion pictures such as “Jurassic Park” and “Spy Kids.” Courtesy Photo by Jeremy Ridge.

These days, Ridge continues to pack his schedule, journeying into a world filled with more than music.

While Ridge continues to play in the San Francisco Opera Orchestra, he has taken on teaching at California State University, East Bay (CSUEB) and Diablo Valley College. His planner already filled to the brim, Ridge works as a music instructor at the University of California, Berkeley and coaches the Acalanes varsity wrestling team as the head coach.

Ridge began playing the bass trombone in seventh grade, where he found his earliest success in the school’s talent show. This would mark the beginning of his extensive career in the music and arts industry.

He was then introduced to soon-to-be band teacher Dave Browder who, at the time, was recruiting students to play. Initially, Ridge was hesitant to take on learning an instrument, already juggling his time between wrestling and football. Along with some strong encouragement from his mother, Ridge took a leap of faith and promptly began practicing the bass trombone.

“You never know how your life is going to turn out. At any one point, looking back over five years, you’re generally in a different place than you thought you were going to be,” Ridge said. “You never know when these little happenstance moments will change your life.”

It wasn’t until the summer of his senior year that Ridge realized he wanted to pursue a career in music. Taking a bold step, he chose to audition for the Eastern Music Festival as opposed to wrestling, earning a spot in the concert. With the intention of leaving the festival early to go to wrestling camp, he chose to stay at the festival for the summer. He quit playing sports his senior year to continue his passion for music.

“I was the captain of the wrestling team and the football team, so to come back just to quit playing was a big deal. But I just transferred the discipline that I had learned in wrestling to music,” Ridge said.

Ridge spent four to six hours a day practicing. With discipline and hard work, he landed himself at the New England Conservatory of Music.

Though he’s taught at conservatories and master classes across the country, Ridge prefers teaching at CSUEB, saying he leaves a greater impact on his students.

“When a kid goes to conservatory, he’s pretty much already made the decision he wants to be a professional musician. When a kid comes to Cal State East Bay, it’s all over the place,” Ridge said.

Ridge’s students have played with Green Day, U2, and even followed in his steps to Broadway. One student, Doug Beavers, boasts multiple Grammys. Several of his students also teach music around the Bay Area and the rest of the country.

“A really great teacher teaches you to teach yourself so you can find out what your passion is so you can go that way. What you want to do is help them find where they are most comfortable, doing the things that they love to do,” Ridge said.

Ridge’s routine is constantly changing, something he likes about his work. One week, Ridge could be at the studio recording for a new video game or film score. During opera season, Ridge might have six different operas all going on at the same time.

“What I like about the work I do is that it is always changing. I find that very appealing,” Ridge said.

With his extensive career, Ridge’s favorite moment of his career is touring with “Les Miserables.”

“It’s such an uplifting show. It’s really an amazing event, to play ‘Les Miserables.’ Especially then, when it was a show back in the early nineties. There was so much excitement, we sold out everywhere we went,” Ridge said.

“It’s a culmination of all the arts. Art, theater, acting, dancing, singing, music, stagecraft, it all comes together in the same way it does in a motion picture,” Ridge said. “It’s the same reason why I like recording film scores because, without it, you lose something.”

Ridge says the emotional impact of playing music in the opera is what makes his job most rewarding.

“Whenever you go to San Francisco opera, hopefully, you kind of forget yourself, and you forget that it’s opera, but it’s a story, and hopefully that story has some kind of impact on us  to make us reflect on our own lives and it enriches us in some way,” Ridge said.

Although he enjoys playing in film scores, Ridge also enjoys recording for video games. With video games, musicians record up to three times the amount of music as film scores, and their work is often heard by players who interact with the video game for up to 40 hours.

“When my kids were little and were playing the ‘Force Unleashed’ or something like that, you can constantly hear yourself,” Ridge said.

Looking back, Ridge feels there’s only one message for high schoolers: do what you really love and don’t choose a career just to make money.