// Thousands of spectators stared intently down at junior Aimee Gee as she glided across the ice before coming to a stop in the middle of the rink. A hush fell over the crowd as eight spotlights shined down on her from the four corners of the SAP Center in San Jose, California, causing her costume to glitter in the white light. She took a deep breath, clasped her skating partner Mikey Tongko-Burry’s hand, and struck a pose. Then the music started.

On Jan. 7, Gee performed in the 2018 Prudential U.S. Figure Skating Championships’ Smucker’s Spectacular, a closing-night event intended to end the week-long skating extravaganza. Throughout the week, the US’s best skaters gathered in San Jose to compete in the Championships, which served as the last showcase for the skaters’ talents before a U.S. Figure Skating selection committee chose the Olympic team for the 2018 Pyeongchang Winter Games.

Gee and her partner danced to “A Bug’s Life Suite,” a song from the popular Pixar movie “A Bug’s Life.” Dressed in monarch butterfly costumes, each decked out with glittering jewels, the pair performed for about three minutes before gliding off the ice to thunderous applause.

Gee, who is part of the Acalanes Special Education program, was invited to participate in the Smucker’s Spectacular through the Oakland Ice Center, where she skates. After receiving the invitation, Gee and her coach, Wendy Sylvia, excitedly accepted, after which they selected Tongko-Burry, a longtime Oakland Ice Center partner, to perform with Gee.

Prior to the Smucker’s Spectacular, Gee participated in multiple ice skating events ranging from competitions and showcases for over eight years. However, her performance at the SAP Center was in front of her largest audience yet. Months of private lessons at the Oakland Ice Center paid off as she stunned the audience with her fantastic performance. 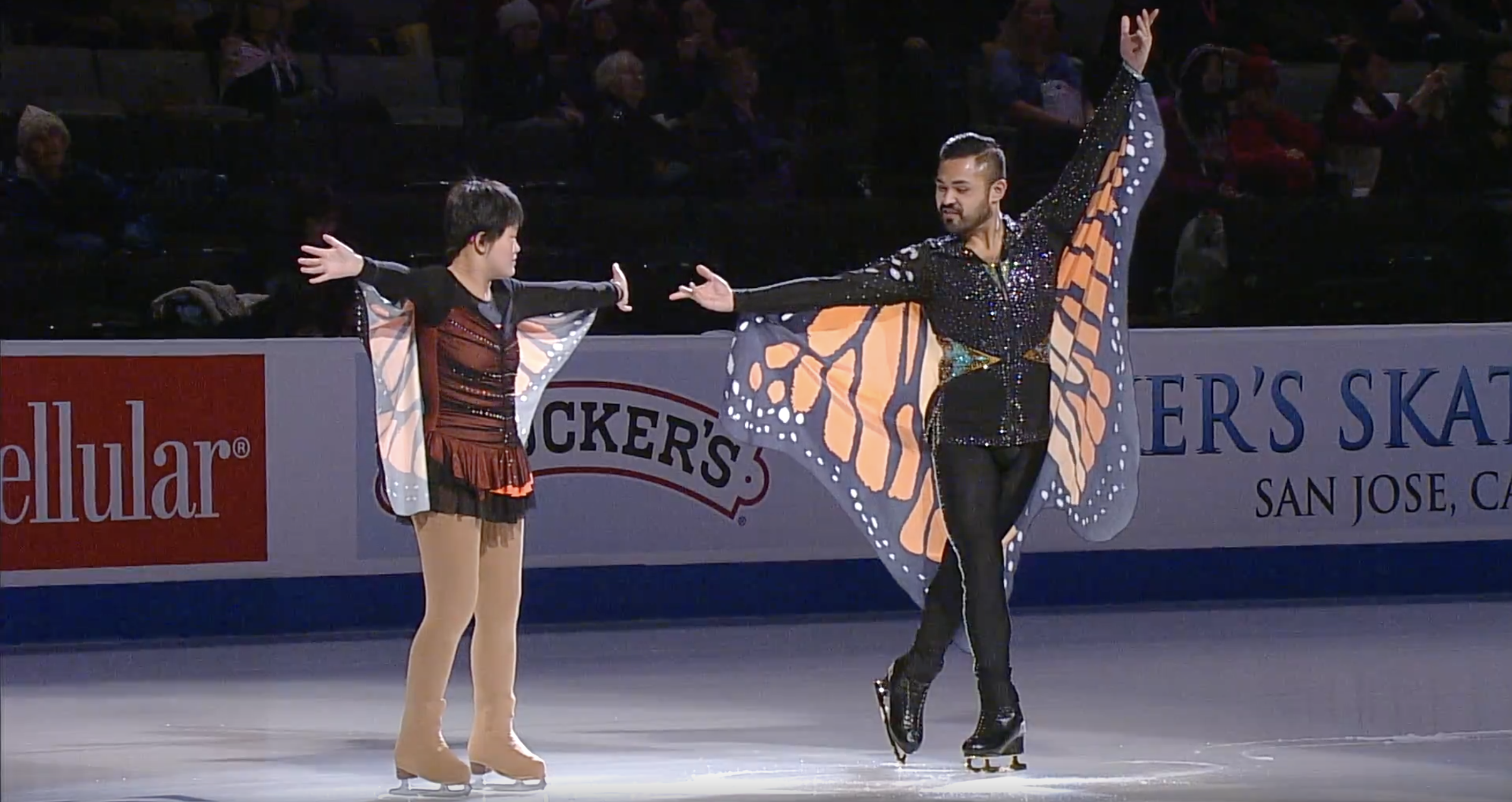 “We’ve lately been making some really good progressions, and it’s been fun for me to watch her get excited. Aimee loves to spin, so the fact that she spun on one foot for an audience was huge,” Sylvia, who choreographed the performance based on Gee’s strengths, said. “I’ve been trying to get her to do that for almost two years so when I saw that, I was very excited.”

Skating did not come easily at first for Gee, who has limited motor planning skills because of her disability. Everything was precisely planned out, from the type of skates she wore to the jumps and spins she executed.

“She doesn’t have motor planning skills, so that’s why skating is also really hard. Every step must be broken down. Skating gives her that constant exercise,” Gee’s mother, Juliet, said.

The sport not only challenges Gee but gives her a sense of freedom.

“The rink is her happy spot. After her lesson, she stays out and skates. It’s her freedom spot where she can let it all go,” Silva said.

Leading up to the performance, Aimee caught a case of the pre-performance jitters. While excited to demonstrate her skills on the ice, she also felt extremely nervous to perform in front of such a large audience.

“She was talking about it for months on end, even before she got the credentials to go. On the day of the performance, she was so nervous. During the rehearsals she skated out and clung to the board and wouldn’t move,” Juliet said. “But Wendy and Mikey encouraged her to go out.”

Gee spreads her love for skating to other special needs students. Aimee has helped other students learn to skate since she was in middle school, and has since then formed a close bond with many of them. Gee, who is hearing impaired, often uses sign language to communicate with the other skaters and coaches.

“She taught some of the autistic kids to get off of the walkers. There was one student with whom she had been working with for a long time, and Aimee knew she could get up and skate. So Aimee pushed her onto the ice and skated away and said, ‘Come,’” Juliet said. “Aimee stood far away, and the student had to get up and skate to her. That’s when everybody realized the other girl could skate.”

Gee has not only made an impact on the skaters she helps but also to those who work with her. According to Tongko-Burry, getting to know Gee on and off the ice has allowed the two of them to build a strong bond.

“I am always so inspired to see where she’s come from, how she started off, and where she is now,” Tongko-Burry said.

Sylvia agrees with Tongko-Burry that the experience of working with special needs students, especially Aimee, is very rewarding.

“I fell in love with the students as soon as I met them. They are gentle, kind, and loving. People get scared because the communication is different, but all you have to do is look into their eyes. Eyes are the windows to people’s souls,” Sylvia said. “I love Aimee. I am so proud of her. This is such a big event, and she did a really great job.”