// No matter which side of the political line you find yourself on, it is clear that America is on unprecedented ground with respect to political and social debate. Between alt-left riots, alt-right riots, safe spaces on college campuses, and a general hair-trigger mentality, social pressures are threatening the right to free speech.

It may seem absurd to say that free speech is threatened. Yes, the United States government has time and time again upheld the First Amendment; however, this is not the full picture. It is no longer enough to look at free speech solely in terms of governmental action. Societal pressures and corporate culture in America are placing much heavier burdens on free speech than the government is.

A growing tendency of progressive ideologists is to emphasize emotional comfort over reason and rights. It is sometimes asserted that one’s right to not be offended may supercede the right of another to speak. Though this debate is not fought on legal grounds or in courts, many viewpoints have as a result become socially “unacceptable.” Opinions that fall outside of political correctness are lambasted to the point where those holding the opinions become submissive. Ostracizing and subduing different opinions is an indirect attack on free speech. 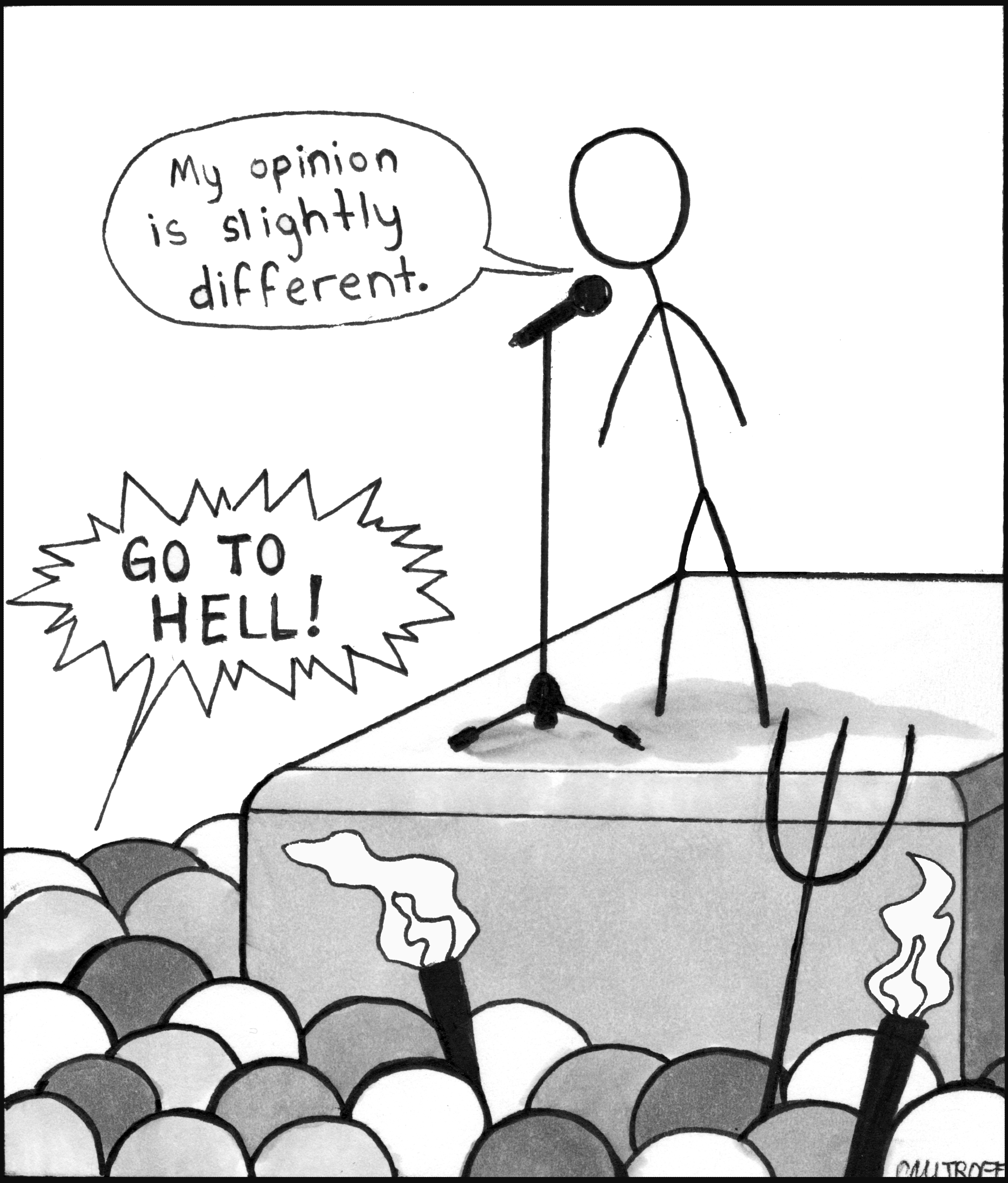 Reasonable discourse depends on open-mindedness. Refusing to even listen to other people’s ideas because they hold unpopular opinions is a narrow-minded approach. Of course, you are entitled to take offense and disagree with someone. However, it is imperative that others be allowed to speak so that you can come to a conclusion having heard all sides of an argument. This is not by any means meant to condone hate speech, but is rather an urge to approach conversation more reasonably and abandon the petty social and political climate.

The emphasis placed on emotion causes words to hit just as hard as physical violence, something clearly shown in the Charlie Hebdo shooting. When two brothers claiming allegiance to the Islamic terror organization Al-Qaeda saw a satirical cartoon of the prophet Mohammed in the magazine, they unleashed a horrific act of terror upon the publication. The shooters in this incident missed the mark entirely. Brothers Cherif and Said Kouachi took the attack on their religion with such offense that they felt physical violence was necessary. What they failed to realize is that Charlie Hebdo did not intend aimless bigotry, but were proposing a satirical viewpoint that could be beneficial to understanding the issue at hand, in this case, radical Islam. Instead of digging and conversing to get to the bottom of the issue, the shooters decided their feelings mattered more than the intention of the cartoon and attempted to silence the opposing viewpoint.

In any political debate, people must risk offending one another in order to have a thoughtful discussion. Hiding oneself from ideas simply because they oppose your own or are offensive to your sensibilities is an ignorant and irresponsible way to approach life and social relations. Modern humans need to be exposed to alternative ideas in order to create rounded opinions.

For all of the modern era, history has progressed through conversation. People talking and ideas mixing help to create new ideas and move society forward. In order for any society to think and progress, its members must communicate effectively. For these progressive conversations to take place, one risks disagreeing with or offending someone in order to look deeper to try and see just what is true and right, and the necessary solutions. It is very dangerous to suggest that disagreeing with someone should be socially unacceptable because it is the pathway to development.

A rally at the University of Toronto entitled “U of T Rally for Free Speech” is an example of this social threat to free speech. The rally came to an abrupt stop when people blasted white noise and physical confrontation overtook the event. The rally was disrupted by activists who were worried that the event may attract unsavory people, according to one of the organizers of the protest. The rally’s organizers had no affiliation with any harmful or offensive group that may have attended and were discussing what should be a neutral topic: free speech. The speakers attempted to organize a peaceful, honest discussion of rights, when a brigade people who disagreed with their opinions escalated it into a tense and at times violent conflict.

The idea of “safe spaces” on college campuses have the potential to threaten free debate. There are two types of safe spaces. The first, a place where students can go to avoid harassment or physical abuse, is a great idea. The second is an echo chamber for students when they are “triggered” or politically offended. If a student feels unsafe ideologically or emotionally, that is a problem that concerns everyone, including the university’s administration tasked with supplying the “safe space.” Risking some offense, however, is a critical aspect of debate. Young Americans need to be able to hear what they do not like, deal with that information, and be able to respond in an intelligent and calculated way. Allowing students to run away from opposing ideas and cover their ears causes them to remain immature and entrench themselves in whatever opinions have been impressed on them up to that point in their life, without potential for growth.

It is irresponsible to allow young people to go through life without resistance. They need to experience difficulties in order to become a mature and rounded person. The pattern of victimization improves nothing and only exacerbates the irrational anger and passion that permeates debate today. Teaching victimization to young people denies them the learning necessary to create meaningful dialogue rather than wallowing in what they think is unfair or offensive.

This is one way George Orwell was wrong in his novel 1984. Orwell understood the threats to free speech, but he did not accurately predict the vehicle through which free speech would be abridged. It is not the government that limits speech, as he predicted, but rather common culture, corporate policies, and universities. Infringements on free speech are coming from the bottom up, rather than the top down.

It is perfectly reasonable and ethical to prevent hate speech and meaningless bigotry; however, preventing dialogues simply because they may involve unpopular opinions crosses the line into the infringement of free speech. Speaking certain opinions often offends people. There are a limited amount of meaningful things a person can say that will not in some way offend someone’s sensibilities. But risking voicing unpopular opinions is not always bad, and in fact serves a valuable purpose in society. We need to guard against the hair-trigger emotions and entrenchments that have become so prevalent today.

No matter what views you hold, it is imperative that you be open-minded and listen without cutting someone off out of pure offense or rage. Genuine discussion and real politics do not always care about your feelings and will not wait for your emotions to subside. Americans need to learn to deal with their emotions in a way that does not interfere in discourse and free speech to preserve the progressive quality of discussion and to allow for the possibility of a better future.