// UPDATE: A similar incident to last week’s graffiti threat at Acalanes, San Leandro High School was sent into a 3-hour lockdown on Mar. 14 after graffiti threatening a school shooting was found in a bathroom, according to the East Bay Times. The image below depicts the message scrawled on a bathroom stall in marker. 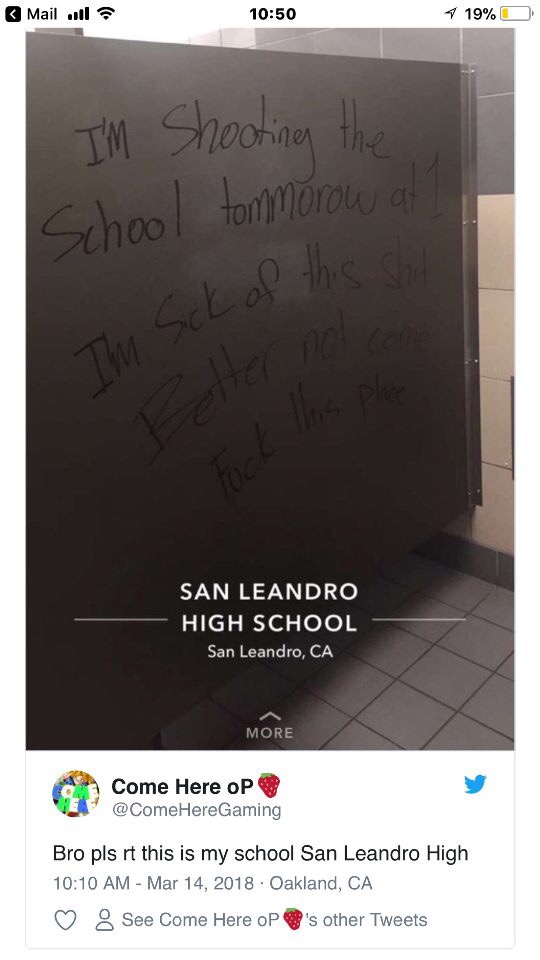 A student reported a threatening message scrawled on a bathroom stall in the 400 wing girls’ bathroom to the administration on Mar. 8, according to an email sent out by Acalanes Principal Travis Bell to the school community. The graffiti read: “I will shoot up the school next week.”

Scribbled on the side of the bathroom stall, the message puzzled Bell and other administrators who initially had difficulty deciphering it. Upon further examination, however, the administration took prompt action. 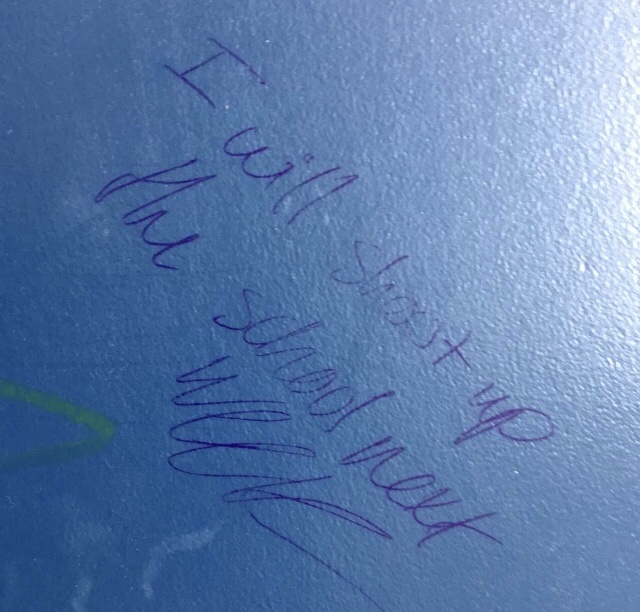 The threatening message inscribed on the stall alarmed many members of the Acalanes community. Photo Courtesy Acalanes Administration

“You have to evaluate credibility, and in this case, we don’t believe it to be credible, but you still have to take the necessary steps to have precautions in place,” Bell said.

The school immediately contacted local police, in hopes of assessing the danger of the situation. The task force looked at cameras, attempting to identify the student responsible; they were unable to catch the perpetrator. Likewise, the photo [pictured above] was also shared among teachers in hopes a staff member might recognize the handwriting. Though leads are minimal thus far, Bell intends to continue working with police in the days to come.

“We knew that it had gone in [the bathroom] in the last 24 hours because the student had used the same stall the day before and not seen the graffiti,” Bell said.

Bell has asked the police department to station an officer outside of the school for the remainder of the week. In light of recent events like the Parkland shooting, Bell felt the police were an appropriate way to encourage student attendance and confidence.

“I’m not going to lie when I say that it kind of scares me. I’m usually not one to get paranoid, but with recent events, I feel like you can never be too sure because it has just become a norm for schools nationwide,” junior Vanessa Urbina said.

Where Urbina saw the potential for danger, others described the incident as a “practical joke,” unbothered by the graffiti’s graphic nature.

“I thought it was a joke because I hear people joking about it all the time and people don’t really take it seriously, or they do, but they don’t want to admit it,” junior Claire Maxwell said. “Of course, I don’t think that’s something to joke about, but other people are just in to joke about it.”

Jokes aside, Bell took the threat seriously and plans to curb such vandalism in the future.

“We are doing some work on how we can have more of a presence in the bathroom. It’s really just trying to get staff to do walk-throughs of the bathroom when they’re in the hallways and really targeting people to go in at different times and check that we’re okay,” Bell said. “We need to respond and make sure we have really clear bathroom policies.”

With new protocols in place for the bathrooms, Bell aims for students to recognize the efforts on the part of admin.

“I hope that in having students seeing [our efforts], and having police officers here the whole week working out of our office on site, that it sends a huge message to our whole community that safety is one of our biggest priorities.”