// Students silently walked through the misty morning air to honor the victims of the Parkland shooting and stand in solidarity with high schools across the country in a national walkout against gun violence on Mar. 14. Many Acalanes students opted to walk out at 10 a.m., leaving class for 17 minutes to represent the 17 lives lost at Marjory Stoneman Douglas High School on Feb. 14.

Passing cars honked and shouted to show their support while teachers and administrators followed the droves of students, making sure all those involved stayed safe.

Acalanes High School was among the 3,136 registered walkouts listed on the Women’s March webpage.

Two seniors, Kate Gilberd and Fiona Warburton, who led the event, combed through the crowd while giving a chilling recital of the names of each of the victims of the Parkland shooting exactly a month earlier.

In Principal Travis Bell’s email to the school community on March 7, he addressed the walkout as a non-school sponsored event but affirmed the constitutional right of free speech to those who choose to be involved.

Although Bell stressed that students can exercise their civil liberties, potential consequences for leaving class unexcused and arriving at their academy period late still stood. Official consequences are not clear, but most believe participators will receive cuts or unexcused absences. For many students, the pros of walking out outweighed these cons.

“The cut has really no effect on me personally because having one cut is a very small sacrifice for trying to enact change and fight for something I believe in. I can’t be punished more harshly for this cut than any other cut, so it’s all the same to me,” senior Theresa Nevins said.

Even with the prospective consequences, an estimated 300 students took part in the walkout.

“Initially there was a small number in the quad when they broke off for the walk, but when I went over to Pleasant Hill Road, the students just kept coming out. I didn’t get a good realization of how big the crowd was until everybody started coming back in, and it was a large portion of the population,” Lafayette’s Youth Services Police Officer Larry Seliga said.

Standing beside these students were multiple Lafayette Police Department officers who had partnered with the school to ensure the safety of students and staff. 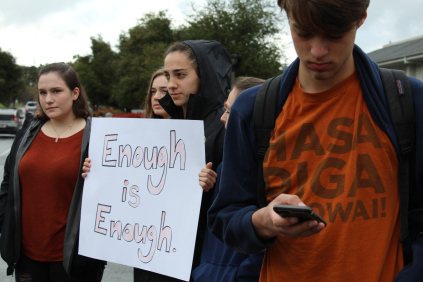 “We were here just to make sure you were able to have a peaceful protest and to make sure the kids were safe in the quad walking to Pleasant Hill Road and coming back into the school grounds,” Seliga said. “We just want to make sure that everyone was comfortable and that they saw that the police were on campus and that they knew that their safety was our main concern.”

Many share the belief that the walkouts are necessary to evoke political change and convince politicians to make gun control a priority.

“As a member of the future generation of America, it is my responsibility to do anything in my ability to speak out and try to reach the ears of the government who are not making any changes. As a student I genuinely do not feel safe at school anymore, any of those school shootings could have been at Acalanes,” junior Aimee Ruane said.

While some showed their support through walking out, others believe it is not the only way. Sophomore Nicole Wan displayed her loyalty to the cause by staying in the classroom.

“The people who were killed deserve remembrance and respect a thousand times over, but I believe the best way to honor them is to stay in school and be grateful of the everyday things we overlook,” Wan said.

Senior Ross Ney, who also decided not to walk out, had a similar opinion to Wan and suggested other ways to make student voices heard.

“I think writing your congresspeople and letting them know what you think is probably a better way to voice your opinion. Even if you’re out there on the street corner, it’s dubious how much of an effect that’s going to have,” said Ney. “If thousands of kids are all flooding their representatives with letters, then they’re going to have to respond or be voted out of office.”

Ruane also stressed the importance of speaking up for one’s safety to both give justice to lives lost and ensure security to those in the present.

“The walkout will probably not immediately change the gun laws, but it will give us a chance to be heard. As kids we need to let the older generations that make up the government that we have a voice and an opinion,” Ruane said.

One Reply to “Students Participate in Walkout to Protest Gun Violence”