It was 7:00 on a Wednesday night, and the Acalanes Union High School District (AUHSD) community room was filled to the brim and spilling out of the door with students holding signs that read: ‘Inter-district transfer students are my friends, classmates, and fellow community leaders,’ and ‘Interdistrict transfers prepare me to excel in a global society.’ As student after student stood before the AUHSD board and told stories of their own or other students’ experiences, the clock ticked on until it was 10:00 P.M. 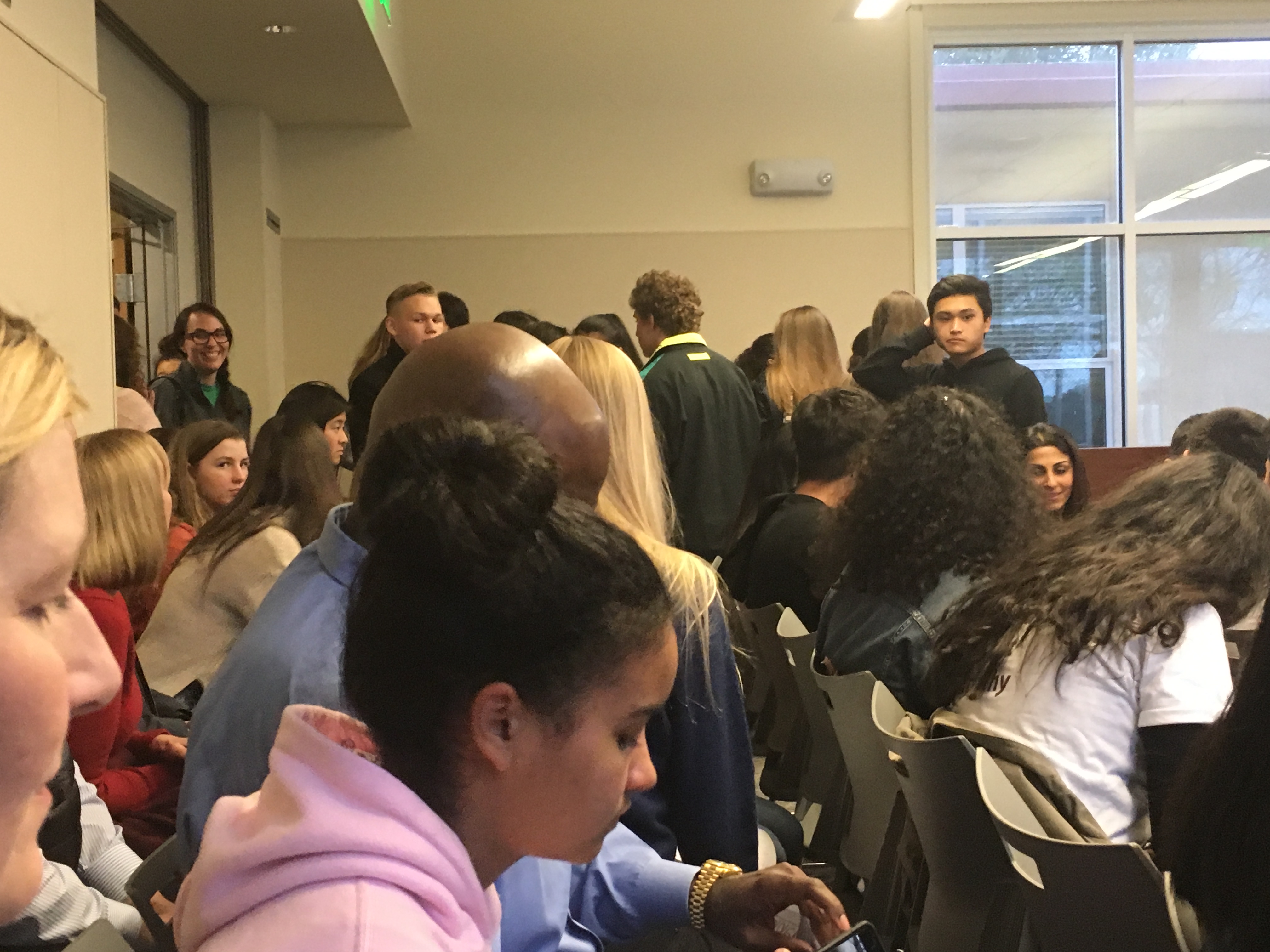 After hours of spirited debate, the AUHSD Governing Board came to the consensus to heavily restrict transfers from other districts, otherwise known as interdistrict transfers.

Among the crowd of student activists was Miramonte High School senior Zahra Hasanain. Hasanain was not hard to spot in part to the hours she spent holding a sign above her head, never once letting her arms drop.

“This issue isn’t about me, or how I feel; it’s about a much bigger cause that I firmly believe will make AUHSD a weaker, less aware, and more exclusive district. Interdistrict transfers are 58% people of color, whereas resident students are only about 35% people of color,” Hasanain said. “Interdistrict transfers live outside of Lamorinda, and the diversity they bring—not only racial and socioeconomic—but the diversity of experience they bring, are truly invaluable.”

The deadline for submitting transfer requests to AUHSD is Thursday, April 19, and the amount of interdistrict transfer accepted will now be capped at 50 students per year. Children of employees, siblings of existing students, and children of employees at partner districts, like the Lafayette School District, will be given priority, with the rest of the applicants being placed into a lottery system—luck their only determining factor.

As for current transfer students, they will be allowed to stay in the district as long as their grades, discipline record, and attendance record stay clean.

The reasoning for this restriction is that the district no longer receives funding for interdistrict transfers, so local property tax dollars are instead used to pay for their education. 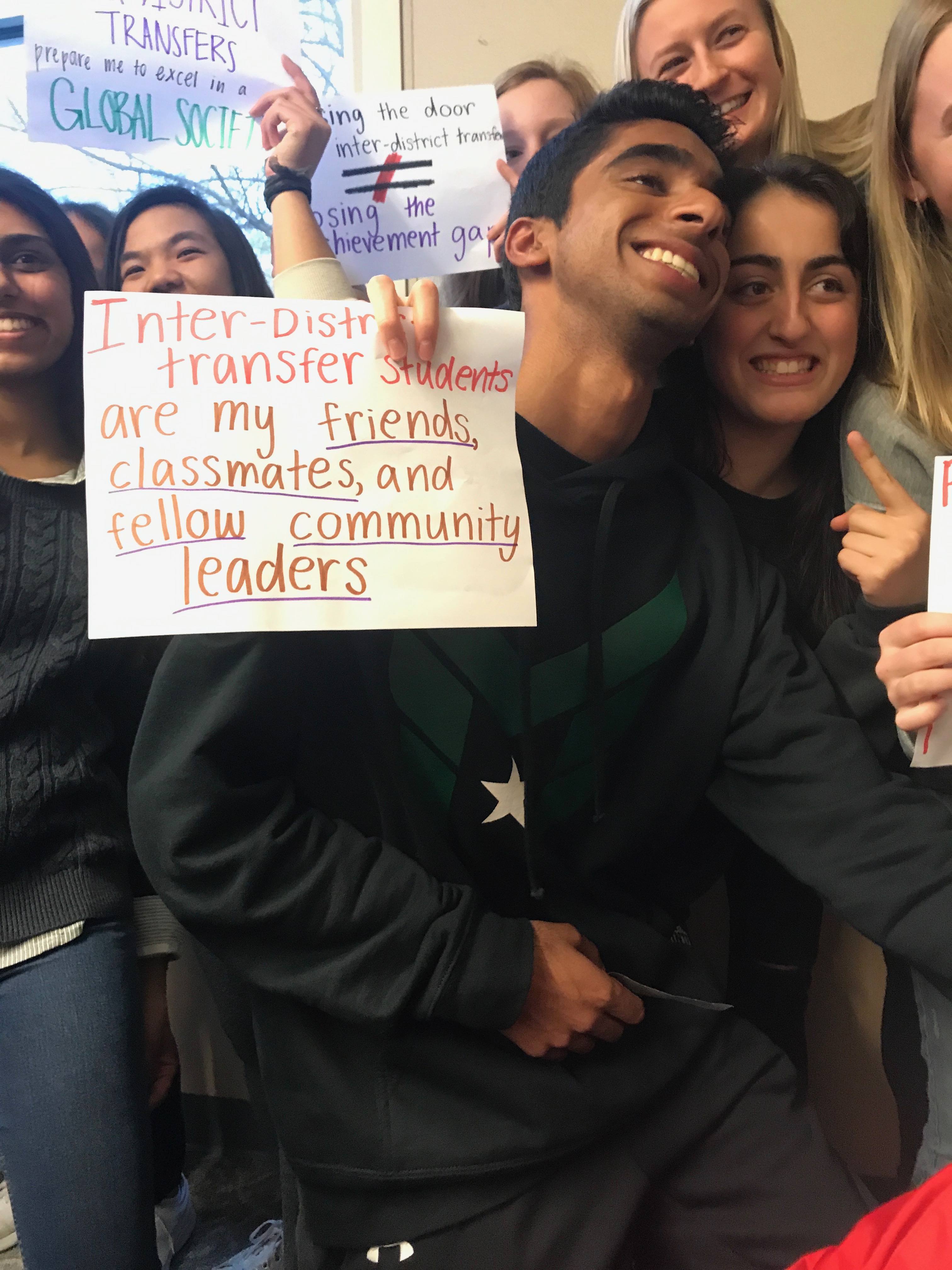 Students are not the only ones who value the diversity of interdistrict transfers. Acalanes English teacher Erik Honda expressed how essential they are to class discussion.

“It’s something that we recognize in our classes as a value, and it’s pretty huge for us in our experience. We know how much better it is to discuss The Adventures Of Huckleberry Finn when it’s a group of diverse students talking, not just white students,” Honda said.

Although AUHSD Superintendent John Nickerson recognized the perspectives of students and teachers, he felt the issue was far more complex than it appeared.

“Many of the students did a really great job of expressing their interest of their experience, while still understanding the complexity of the challenge. I think the students who had less impact on the board were those who were speaking from pure emotion without a recognition of the complexity of it,” Nickerson said.

A common complaint from many student speakers was a lack of publicity surrounding the issue, and therefore a smaller sample of public opinion. Nickerson addressed this issue, along with the rapidly impending matter of time.

Honda has extreme concerns about the future of this district with a limited amount of interdistrict students.

“This district is already de facto segregated. That’s different from de jure segregation, which we were supposedly eliminating after the 1954 Brown v. Board decision, but we are not really eliminating it,” Honda said. “There are lots of ways that you can not have laws, because it would be unconstitutional now to have a law that says, ‘We’re not going to allow brown people from Oakland to come to school in our district.’ That would be illegal, but you could make a policy which has that same effect, which is basically what’s been done here.”

Honda’s disappointment stems from the fact that he has seen so many positive benefits from having the diversity of these interdistrict transfers. As the Chairman of the Diversity Committee, he has witnessed enriched conversations, different perspectives, and new activities that are taking place at schools that would’ve never happened without interdistrict transfers.

The students were not the only ones who voiced their concerns to the board. Parent Damon Harris gave his own perspective as well.

Harris has a set of twins in the eighth grade at Orinda Intermediate School. They transferred into the Orinda School District in the seventh grade. Prior to Orinda Intermediate School, they attended Olinda Elementary in El Sobrante, where their family lives. Like many other parents of interdistrict transfers, Harris wanted a better education for his children, and thus requested the transfer.

Although they have been in the Orinda School District for two years, they still have to request to transfer to Miramonte to continue to attend school in an environment in which they have now grown accustomed. The Harris’ will now be put in the lottery system to determine where they will spend their high school career at Miramonte or not.

“We just want our children to have an equal opportunity like any other child,” Harris said.

Hasanain stressed the important role that these transfers fill in the Lamorinda community.

“Overall, Interdistrict transfers are not only good, but essential to the well-being of our district’s student population. I wish the board would understand that, instead of looking at one stat and making a decision based off that,” Hasanain said.

As for the board, they are required to reevaluate the ever-growing issue of transfers before December of 2018.