// When we westerners think of Vladimir Putin, we usually see a funny meme of a man who never has his shirt on. We see that gloriously uncharismatic look of boredom that’s always written over his skeletal face and poke fun. We even see a ‘badass’ sometimes, a mythic patriot and rebel sticking it to the world in the name of his motherland.

Rather dangerously, however, what many seldom see when they think of Vladimir Putin is a professional liar trained by the most fearsome spy organization in history. What they don’t think of is a man who sees the world in terms of threat assessments and power plays. What they rarely see is a very powerful and resentful man playing games on the world stage whose endgame only he knows or understands.

The Russian autocrat-president’s last month was filled with such games; and they can help us better understand the man helming one of the world’s most important countries.

Putin began the month by embroiling the medieval English town of Salisbury in a Bourne-style espionage plot. On March 4, two people were found slumped unconscious on a park bench. Shortly after, a policeman investigating the case also developed similar symptoms to the victims. It soon turned out that the victims were former Russian spy and double-agent Sergei Skripal and his daughter Yulia, both poisoned with a Soviet nerve agent called Novichok. While the English scrambled to prevent a public health crisis, investigators quickly linked the attack on Skripal to Russian Intelligence, and by extension, president Putin.

While juggling the political fallout of sanctioning a murder in a foreign and decidedly sovereign nation, Putin took the time to win the Russian presidential ‘election,’ triumphing with a suspiciously undemocratic majority of over 76%. Though election observers noted the election was efficiently administered, it was marred by a characteristic lack of competition and the repression of any viable opponents, most notably opposition leader Alexei Navalny.

In March alone, we see two of Putin’s trademarks in action: aggressive, provocative foreign policy that disregards international norms or customs, and efficient manipulation of Russia’s political system to maintain power. The events of March are only the latest in a very long series of acts committed or sanctioned by Vladimir Putin.

Now, many of the happenings referenced here, strictly speaking, were never officially attributed to president Putin. Some readers would gladly point this out, and while it’s true that Putin has never been explicitly tied to, say, the Moscow Apartment bombings or the murders of former spy Alexander Litvinenko and journalist Anna Politkovskaya, it’s ignorant to think he was not somehow involved. Other readers, perhaps Putin apologists or jingoistically-inclined Russians, would counter that Russia needs a strong leader, and that the Russian people thrive under firm governance.

Strong leadership, however, does not equate to killing innocent people. It doesn’t equate to ordering tanks to fire at a school filled with over a thousand hostages in order to kill a few dozen Chechen terrorists, like Putin did during the Beslan School Siege in 2004. Strong leadership does not entail disregarding sovereign borders and international norms, as Putin did in 2014 with the annexation of Crimea or in 2008 in South Ossetia. Strong leadership doesn’t mean belligerently propping Syria’s authoritarian regime despite having no business doing so. Strong leadership shouldn’t mean regularly undermining the political process and fostering corruption, as has been done in Russia since the establishment of ‘democracy’ there in the early 1990s. 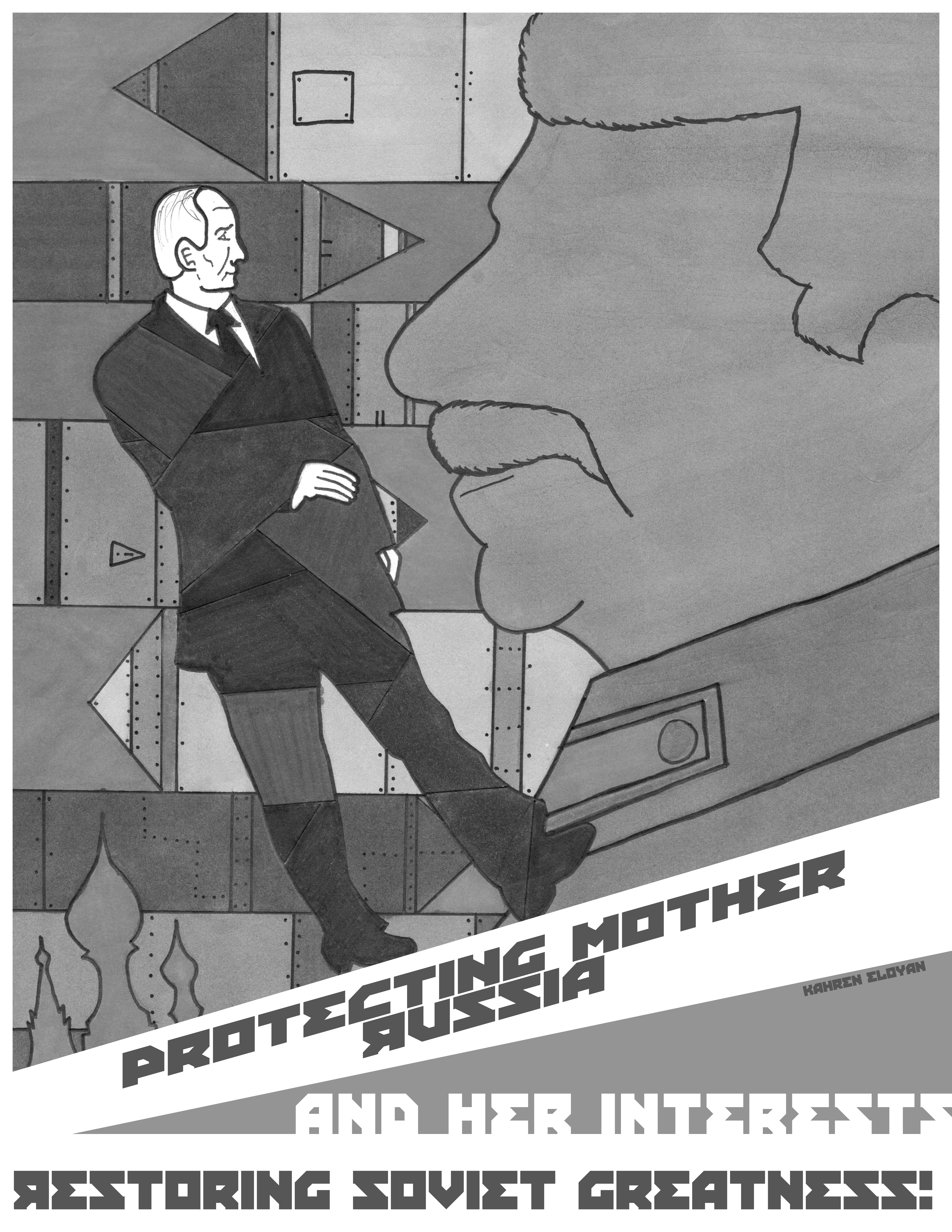 Let’s look at an instance of Putin’s strong leadership and see if we can learn anything. In September of 1999, a series of apartment bombings shook Russia. In all, 293 people were killed when the bombs detonated in the middle of the night. It’s hard to imagine a more evil act than this assault on the unprotected innocent, and the wave of fear following the attacks amplified their destructive results.

Putin was then Russia’s Prime Minister, and his handling of the crisis catapulted him into the presidency. Putin also launched the Second Chechen War, targeting the supposed perpetrators of the attacks. There are well-founded suspicions, however, that Putin was behind the attacks somehow. Three agents of the FSB, Russia’s federal security service (which Putin led until a month before the attacks), were arrested in the city of Ryazan for planting a bomb in an apartment building similar to those used previously. The Kremlin later claimed the agents were performing a training exercise and ordered their release. As a result, many people believe that Putin was involved in the attacks, and many of those people have wound up mysteriously, violently dead. The very same Litvinenko referenced above accused the Russian government of orchestrating the attacks on multiple occasions. He was later poisoned by FSB operatives in London with highly radioactive Polonium-210 in 2006.

For most authoritarian world leaders, and that’s what Putin is, the bombings would be the most bald-faced act of violence and corruption in their careers. For Putin, however, that dubious honor might go to his shockingly efficient murders of his opponents. In February 2015, political dissident and opposition leader Boris Nemtsov was gunned down mere blocks from the Kremlin, the literal center of the Russian state. Video footage of the attack from a crucial angle strangely never surfaced. Journalist Anna Politkovskaya was similarly mysteriously murdered in October 2006 (on Putin’s birthday, no less), likely because of her accounts of Russian human rights violations during the Second Chechen War. Suffice it to say that Vladimir Putin has no aversion to murder, kidnapping, torture, blackmail, theft or any of the other fun activities he missed out on when he failed to become an important KGB agent.

What’s especially dangerous about Vladimir Putin, however, is the idea that his main aim is to ‘restore’ Russia’s greatness. While it’s likely true that Putin, witnessing the USSR’s disintegration, was left resentful towards the west, he doesn’t really care for his people. Putin is not a savior, nor a patriot leading the Russian people out of the darkness of the 90s. He is a power-hungry, merciless, immoral, brutal, barbaric, cold, and calculating con man. His only interest is self-interest. His aim is power, nothing more, nothing less, and beneath his accounting-firm appearance and nimble, strategic mind lies the heart of a simple, greedy thug.

His policies back this assessment to a tee. For example, when the oligarchs wanted to keep defrauding the Russian people, did Putin the patriot stop them? Of course not. Instead he created more oligarchs, putting his childhood friends in control of markets and then paying them artificially inflated prices, as well as bringing the violent, ex-military group of politicians known as siloviki into power—including several old friends from his KGB days. When the enormous crimes of Stalin were being brought to light, how did Putin the Russian patriot react? He recoiled, rushing to airbrush the legacy of a madman who killed millions upon millions of Russians. So no, Vladimir Putin isn’t working for the Russian people, though he’s sold that idea very well.

But why does any of this matter to us? Surely we can rest easy knowing that the cold, blood-stained hand of Putin doesn’t cast its shadow over us? Unfortunately, the Russian president is not content merely to destroy Russia’s democracy, crush the Russian free press, and violate the human rights of Russians.

Putin is actively manipulating our elections, spreading misinformation through his cyber army, and hacking our infrastructure and power grids. While we debate whether or not Putin is responsible for the cloud of degeneracy hanging over Washington, D.C., the Russian hydra is quietly assessing the strength of our cybersecurity. Russia’s infamously-effective hackers are preparing how best to turn out our lights, devastate our highways and roads, blow up our pipelines, melt down our nuclear reactors, and generally destroy us. These are the ways we know that Putin is working against us. It’s frightening to think of all the undetected methods he’s employed in his penetration of our country.

It’s bewildering how few Americans are up in arms over Putin’s infiltration of our country. Vladimir Putin is holding a Kalashnikov to our heads and we barely know it. And aside from not knowing how dangerous the Russian president is, we have leaders who aren’t even operating on comparable intellectual levels. Our president, for all his macho posturing and art-of-the-deal rhetoric, would get steamrolled in any encounter with the Russian president. Vladimir Putin is a man whose power walk involves not swinging his dominant hand so he can draw a gun quicker. He’s a man whose posture is designed to show you he’s more powerful than you. Putin enters rooms and immediately dominates them. He cuts off his translators just so he can show people how little he cares about them.

There’s a word in Russian: ‘khitri,’ which as any self-respecting Comp Gov student knows,  perfectly describes Putin; it means shrewd and cunning. Put someone operating at Putin’s level in a negotiation with Donald Trump, and our Donny would have circles running around him.

All of this matters because we need a leader who can match Putin now more than ever. We need a leader who can shore up our weakened democracy and shield us from Russia’s state-sponsored cyberterrorism. We also need a leader who will stand up to Putin on the world stage, because it’s difficult not to see parallels between the patterns of aggression and provocation of Putin and a certain German Chancellor in the 1930s. The Russian president keeps pushing the boundaries of what’s acceptable and every time, instead of stopping him, the world accepts his aggressions. Vladimir Putin needs to checked somehow, and it’s all too painfully obvious that our leaders aren’t the ones who will do that.

As the next generation of leaders and Americans, we need to be aware of what a threat Putin is. We need to push those around us to see the Russian president for what he is. Vladimir Putin is not a meme. Vladimir Putin is many things, but harmless isn’t one them. It’s time we take him seriously, because the consequences are too grave if we don’t.