// Every year at Acalanes, the week approaching prom, dubbed “prom wise week”, warns students against the dangers of drinking and driving, in hopes of preventing tragedy during prom night.

Leadership’s student support board approached this goal in three different ways: showing students how much alcohol impairs the senses, giving statistics revolving around drunk driving, and telling people how important their lives are to those around them.

On the Monday before prom, a lunchtime activity helped show students just how much alcohol affects their vision. Drunk goggles, which may seem like a fun toy, are actually an effective educational tool. They do a good job of showing how disoriented drinking can make people by having them participate in a series of challenges while wearing the drunk goggles.

“The purpose of this activity was to help students understand how being intoxicated will affect motor skills and perceptions and how it can greatly affect their driving,” McNally said. 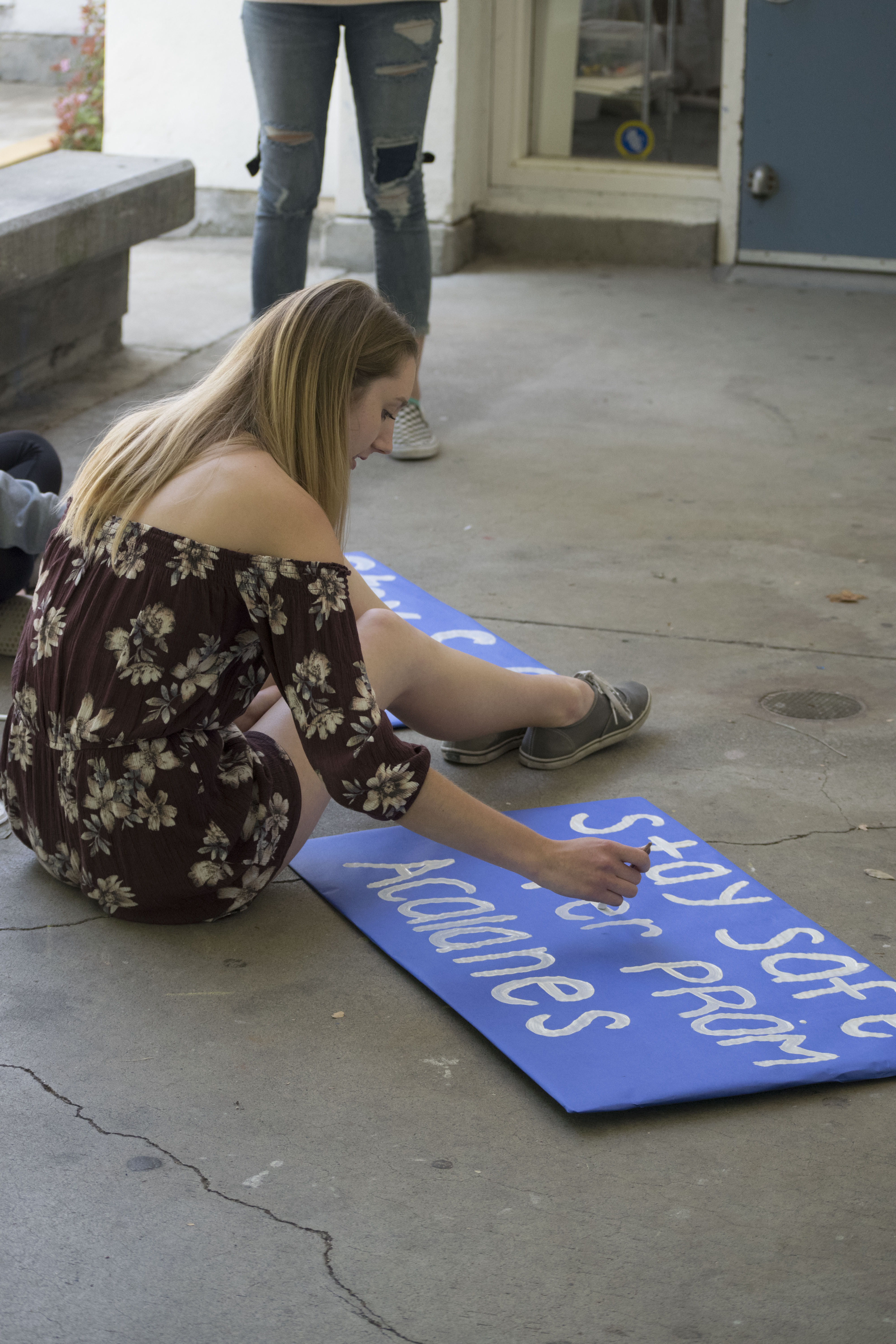 “About 4,000 drivers are killed each year with drugs in their system” and “If you’re driving under the influence of cannabis, the chances of you getting in a car crash increase by 300%” were just two examples of these statistics.

On Friday, the day before prom, students found cards on their cars after school.

“The letters from parents are to remind students how much people care for them. It’s something we do every year because the parents really say it best on how important it is to stay safe,” McNally said.

These included notes like “Prom night is a night to remember. Please make smart decisions, and we can’t wait to see you do big things in this world” or “Hope you have the night of your life at prom! But make sure to stay safe.”

These notes were signed “your parent” or “someone who cares”.

“Being a student myself, my words can only go so far, but when they come from a parent, they become real and show the impact beyond the school campus,” McNally said.

Every four years, including last year, Acalanes hosts the Up2U assembly during prom wise week. Hearing parents who have lost children to alcohol or drug related deaths greatly speaks to the student listeners.

“I personally like having the assembly, and more specifically the parent speakers, because it really impacts the students and shows the consequences”, McNally said. Every Acalanes student gets to hear it once during their time in high school, with those words hopefully staying with them for the rest of their lives.

Although prom wise week’s mission was to spread awareness of drinking and driving, it struggled to reach all students.

“I don’t think it’s effective because people were thinking about so many different things that week, especially with AP tests, that they didn’t even know it was happening,” senior Sarah Nelson said. According to Nelson, it was hard to make a difference when no one was paying any attention.

A more successful part of prom wise week came from senior Ariella Zulch, who led two discussions on consent following a video she had made on the topic.

“I realized myself that I didn’t really understand consent and the implications of consent under the influence of alcohol, so I figured I’d start asking people,” Zulch said.

Starting last June, Zulch spent ten months filming and perfecting her video, combining a variety of people’s thoughts on consent. “I wanted a diverse range of people, so you notice there’s people from different sports and friend groups. I didn’t want anyone to think that it didn’t apply to them,” Zulch said.

According to Zulch, it’s important for people to be educated about consent. Her three main points she hopes her audience takes away from the video are: “Consent is trust and when you’re drunk, your judgement is impaired so your judgement to trust someone is not there,”  “Don’t be alone when you’re drunk and don’t leave drunk people alone,” and “Saying no. You can say no anytime, anywhere, to anyone, for any reason,” Zulch said.

During prom wise week, Zulch held two academy sessions to watch and discuss the video. Students talked about different situations, explaining when the meaning of consent is necessary, and where it gets a little hazy. In the future, the video will be integrated into the sophomore Human and Social Development (HSD) classes.

“I think it’s really important that they’re all seniors. If young people see their role models, it can really change things, and that gives me hope,” Zulch said.

Prom wise ultimately aimed to, rather than prevent people from drinking all together, educate them on the dangers that go along with being intoxicated.

“We are not oblivious. Everyone knows parties are thrown and people make bad choices,” McNally said. “Our goal is to hopefully remind people that if they do make these choices, to make them in a safe and responsible place.”

To view Ariella Zulch’s video on consent, click the link below.