// 2018 Pops Concert struck a chord with the audience through nostalgic arrangements and high school throwbacks on May 22 and 24, as part of many seniors’ last Acalanes performance. The ‘Songs From our Childhood’ themed concert touched on early childhood Disney hits, Very Potter Musical arrangements, and the Nickelodeon songs all teenagers know and love, with modern pop songs from artists Ed Sheeran, Rihanna, and Harry Styles mixed throughout.

Beginning with a Mass Choir serenading of Lin Manuel Miranda’s Found from Hamilton, the set quickly transitioned to present Claire Levinson and Lauren Ramlan singing New York State of Mind by Billy Joel. These singers’ impressive vocals resonated with the crowd, as they settled in for the concert.

The Acalanes Women’s Ensemble performed an iCarly-Victorious mashup, to hash out the debate over which show is better. This arrangement called on the memories of many of the performer’s classmates who grew up watching these TV shows, and was an uplifting blast from the past. Similarly, Alex Gilberd and James Liem’s performance of Without You from Spongebob Squarepants prompted nostalgic laughs as students recalled the innocence of days watching the Nickelodeon program. 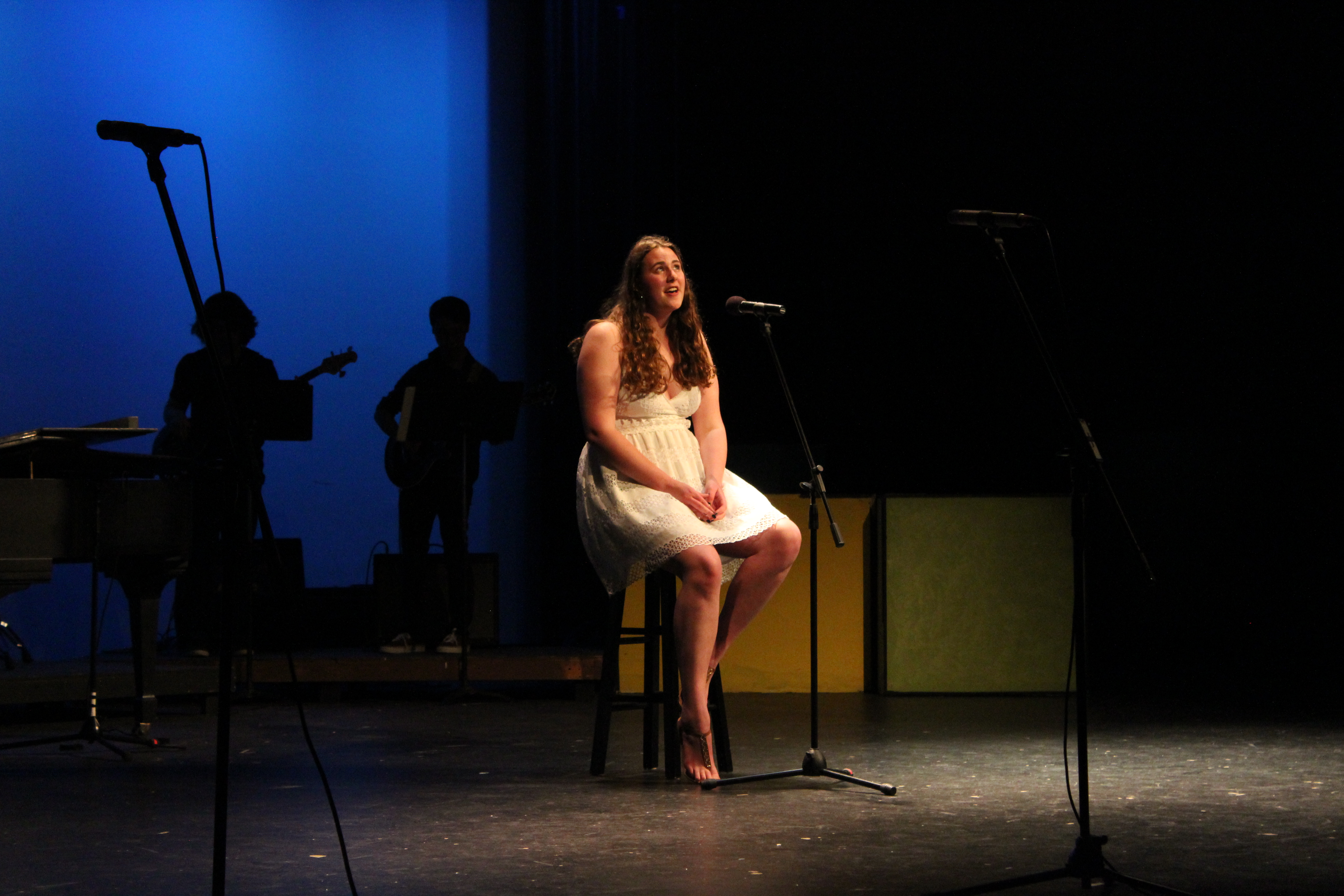 For another reminiscent performance, Dylan and the Bimbettes (Dylan Orsolini, Kaitlyn McKendell, Theresa Nevins, Aneesa Edraki) recreated their Stacy’s Mom production for the fourth time in their high school career. This light-hearted and comical showing entranced the crowd as Dylan and the Bimbettes danced around the stage to the 2000’s hit song.

Concert Choir sang Rihanna’s Umbrella, entering the stage with approximately twenty open umbrellas, releasing copious amounts of bad luck into the theater. However, this bad luck seemed to exert no effect, as the song was a great success.

The Acalanes Innuendos group, including Blueprint’s own Demetri Leones, sang an A capella version of Electric Light Orchestra’s Mr. Blue Sky, an uplifting throwback to the seventies band’s song. The all-boys group cast an upbeat mood into the theater unencumbered by instruments. This E.L.O. song followed Helen Kleinsmith and Stephanie Liu’s duet Give It Up from the Nickelodeon show Victorious.

Tabitha Kenney and Kara Mickas’ You’ve Got a Friend in Me, along with Maddy Blair and Bronte Torralba’s Take Me Home, Country Roads, preceded a performance of Africa by Toto from the Dons Chamber Singers. These comfortingly familiar songs perpetuated the sentimental mood of the ‘Songs From Our Childhood.’

The 2018 Pops Concert was a last for many seniors who have been a part of the Acalanes Performing Arts Department throughout all four of their years in highschool. In honor of this landmark, the senior parents climbed on stage to sing I Hope You Dance by Lee Ann Womack to their kids as a tribute. Along with the proceeding brother sister duet by Blake and Claire Levinson, this parental performance was a heartwarming send off for the senior students nearing graduation.

The concert concluded with a second Mass Choir song, this time Everyday from High School Musical 2, a carefree and lighthearted performance.

The ‘Songs From Our Childhood’ 2018 Pops Concert found great success while travelling through the ages of music. High schoolers of all kinds found nostalgia in the references to their upbringing, and the reflection on the past was a fitting final performance for the second semester seniors. Thanks to Bruce Lengacher, the Acalanes Performing Arts Department and all the students who contributed to the concert’s content, the 2018 Pops Concert was a hit.