// The football team put up a strong effort against a tough opponent in Archbishop Mitty (San Jose), but it was not enough as the Dons lost 22-17.

Acalanes came out of the gates strong to open the game on Friday, Sept. 7. Senior outside linebacker Alex Cortessis forced the ball out of the hands of Mitty quarterback Shamir Bey on the game’s opening drive. Junior middle linebacker Mikey O’Donnell was credited with the fumble recovery, giving his team the ball at around midfield.

Five plays into the drive, junior quarterback Nick Kresnak found senior wide receiver Chris Rogers for a 26-yard touchdown. After forcing a three and out, the Dons retained possession deep in their own territory. Acalanes fumbled, giving the ball right back to Mitty. The Monarchs connected on a touchdown of their own to tie the game at 7-7.

In the second quarter, Bey launched the ball downfield for a 39-yard touchdown, as well as a two-point conversion to go up 15-7. Mitty then marched down the field to score a five-yard rushing touchdown, scoring its 22nd unanswered point to go up 22-7.

Sophomore kicker Hunter Ridley knocked a 27-yard field goal through the uprights, making the score 22-10 at the half.

After a scoreless 3rd quarter for both offenses, the Monarchs regained possession close to their own endzone after an Acalanes punt was downed inside Mitty’s five-yard line. On the ensuing drive, Bey was intercepted by Cortessis, giving the Dons excellent field position. Three plays into the drive, Kresnak found junior wide receiver Lucas Eppinger for the eight-yard score.

After the defense forced another punt, Rogers returned the ball all the way to the Mitty 26-yard line, only to see his excellent run be nullified by a block in the back penalty.  After being forced into a third and long, Kresnak escaped pressure and found none other than Rogers for a spectacular first down. However, this time there was a holding call against the Dons. 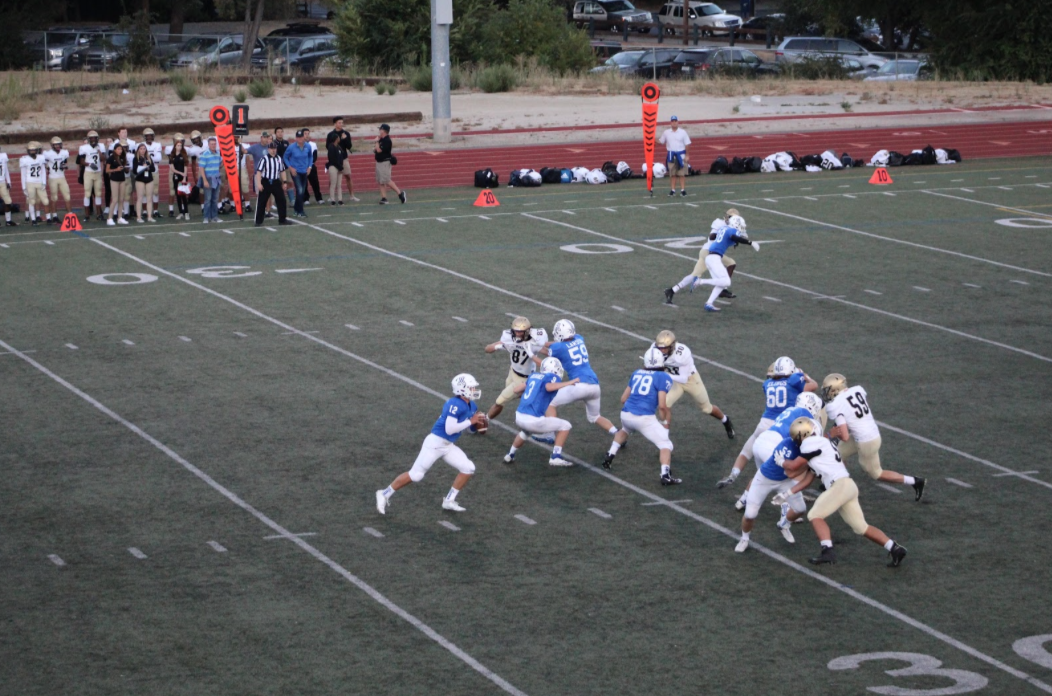 The Dons were forced to punt, and Mitty ran the clock out with a few first downs.

“We fought the whole game. We were a couple of holding calls away from winning that game, but we played good in the second half,” Kresnak said of his team’s performance.

Kresnak had his third consecutive game throwing for more than 300 yards, tossing for 304 yards and two touchdowns.

On defense, Cortessis was the standout, totaling 3.5 sacks, along with 11 tackles, an interception, and a forced fumble.

“I thought we played well in spots and struggled in others,” Cortessis said. “I think we were the better team. We just didn’t show it.”

Next week, the Dons will look to bounce back as they host El Cerrito on Sept. 14. El Cerrito holds a 1-2 record.

“It is going to be a good one next week against El Cerrito,” Kresnak said.