Library Starts the New School Year with a Renovation

Day after day, students flood the library during the early mornings before school, scrambling to finish and print last night’s homework. But this year, library renovations may cause this age-old pattern to change.

Increased funding for renovations from the Acalanes Parents Club and Acalanes Union High School District (AUHSD) budget spurred enhancements for the campus libraries over the past two years. The library’s most recent change is the reduction in its number of computers to provide more empty space.

According to Acalanes Librarian Barbara Burkhalter, all four libraries in the district are being remodeled. Burkhalter hopes that more modular, mobile furniture will increase the versatility of the space by teachers.

The library is now maximizing its space with more seats for students, by getting rid of many desktop computers. Rather than attempting to do homework next to a large desktop computer, students can now spread their binders and notebooks out on a flat surface.

With more space to work, this new development intends to increase student productivity and focus.

Laptops are now in place of the old desktop computers, of which only six remain. The library offers mobile laptops for students to check out and use for homework, research, and printing.

Although each freshman, sophomore, and junior student received a personal Chromebook for their studies, the library also offers Chromebooks that can be checked out.

Burkhalter also believed that the desktop computers were approaching the end of their lifespan.

But with this change comes disapproval from many students.

In the first couple weeks of the school year, the library was not supplied with its laptops yet. 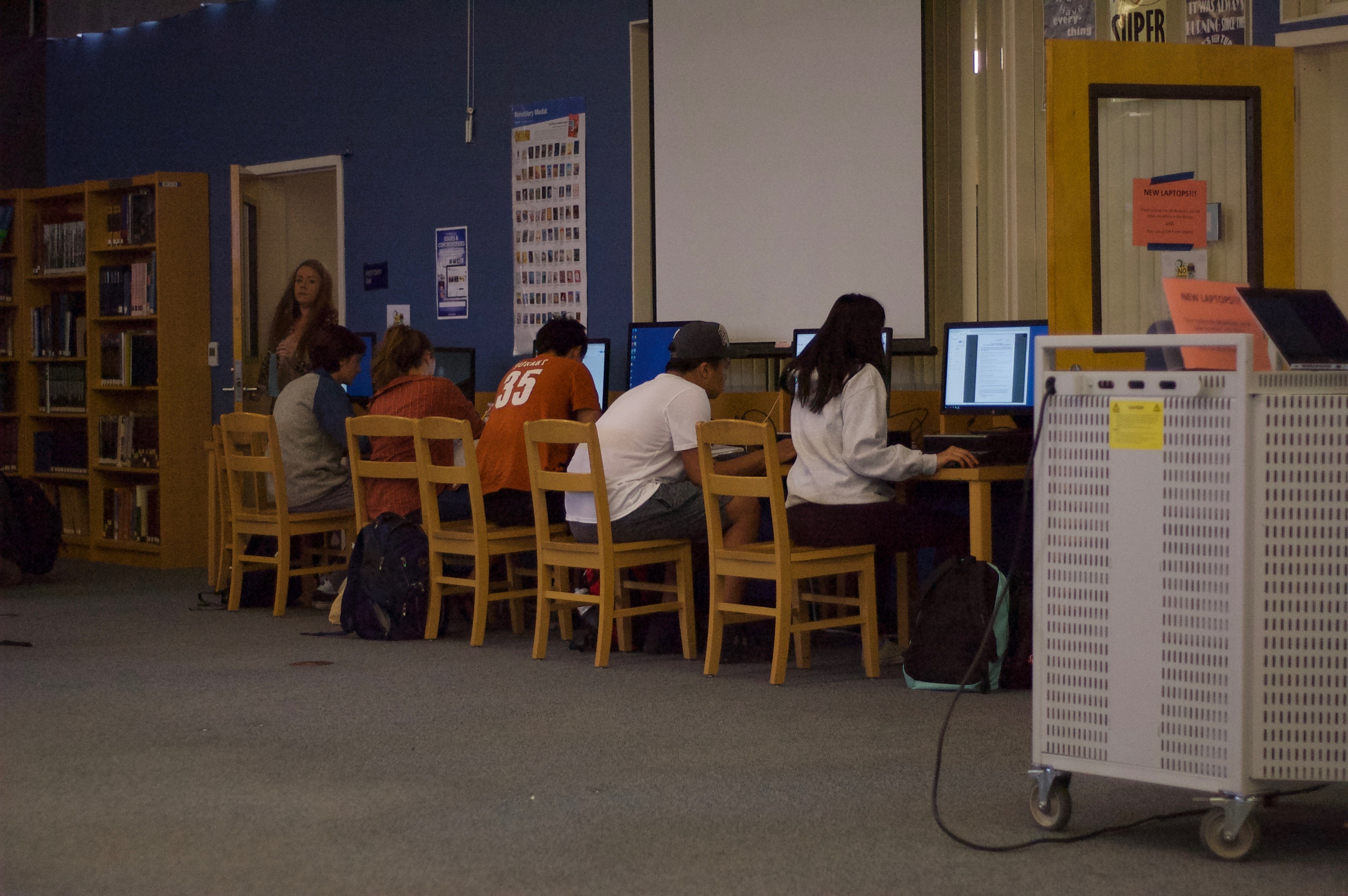 “I think what slowed people down was the inability to get on a computer and the first two weeks we did not have the laptops,” Burkhalter said.

Senior Sierra Goodfriend, who doesn’t have a school issued Chromebook, found it challenging to find an avaliable computer.

“Usually all of the computers are filled up during snack and lunch, now everyone hogs up the few desktop computers left,” Goodfriend said.

But once the laptops were integrated into the library, students began to divert their attention from attaining a desktop computer to checking out a laptop.

“Now I am starting to see five to seven of them being pulled, students realizing that they can print from them,” Burkhalter said.

Despite the integration of the new devices, students continue to provide plenty of backlash on the issue.

“Although the laptops are very mobile, they aren’t nearly as durable or as good as the desktops,” senior Emersyn White said. “I think the moral of the story is to not fix something that is not broken.”

Alongside the technological remodel, yet another policy being enforced may continue to cause strife with students. The library is no longer accepting IOU’s- short for “I Owe You” -and upfront payment for printing is now required. According to Burkhalter, the IOU system caused chaos last year.

“That’s what this area is for, but consider that it is not a very pricey charge per page and ink is fairly expensive. Otherwise, we are happy to offer the service of printing,” Burkhalter said. “But it just got out of hand to a point of a couple hundred dollars that were not paid back at the end of the year.”

This new policy has elicited complaints from students, who are not used to having to pay upfront and now have to carry change.

“I think it’s a reasonable and just policy. I’m just not particularly fond of it,” senior Sofia Swatt said. “If I am running late and I forgot to print out an assignment with no money on me, I sometimes have to take a zero.”

As feedback is received by Burkhalter, new means for payment may come to replace the IOU policy.

“The only thing I would say about that is I know a lot of students often operate with Apple Pay or a debit card and it would be great to have something that colleges do where you load up a card and when it runs out, it’s up to you to pay up,” Burkhalter said. “Maybe in the future, we could get something like that going but, for now just carry around a little baggy of change.”