// With an astounding rating of 96 percent on Rotten Tomatoes, “To All the Boys I’ve Loved Before” is not your typical Netflix romantic comedy. It introduces a unique story based off of Jenny Han’s novel that is appealing to many viewers.

Lara Jean Covey (Lana Candor) is a normal high schooler with an unusual pastime. She writes deep, personal love letters to each of the boys she falls in love with, addresses the envelopes, but never sends them.

In the midst of Lara Jean starting her junior year, becoming the new role model for her younger sister Kitty (Anna Cathcart), and saying goodbye to her older sister, Margot (Janel Parrish), for moving away to college, each of Lara’s five love letters are mailed out. One letter is sent to Margot’s ex-boyfriend, Josh (Israel Broussard). Another letter is sent to one of her former flames named Peter Kavinsky (Noah Centineo), who coincidentally is her enemy’s ex-boyfriend, Gen. The other three letters are sent to people she knows from homecoming, camp, and Model United Nations. 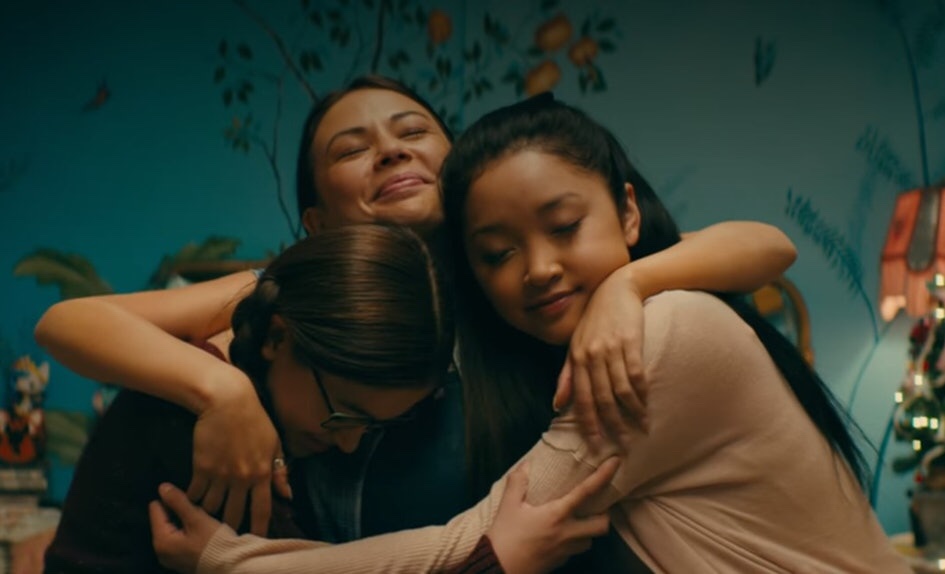 As Lara Jean frantically decides to take control of the situation after literally fainting upon discovering the letters are out, she tells Peter that she doesn’t have feelings for him anymore. Peter then counters with the surprising idea that they should fake-date each other to make his ex-girlfriend and Josh jealous.

Thanks to its exciting plot, this Netflix original may well be a new teenage cult classic, combining aspects of legends like “Mean Girls” (2004) and “White Chicks” (2004). The actors, even though they don’t look like your typical juniors in high school, do accurately portray teenage characteristics that make the movie very relatable for Netflix-obsessed teenagers. For example, Lara Jean is petrified of driving, which is a place that most teens are in while preparing to get their license.

In an early scene, Lara Jean forgets to look behind her before backing up and almost runs into Peter…a typical teenage mistake. She then apologizes to him and, to her embarrassment, has to re-park the car. When Kitty asks what she’s doing, Lara Jean says, “We’re waiting for the rest of the cars to leave.”

Another relatable action Lara Jean does is hold multiple fake conversations with herself in her head, which almost anybody has done at least once. This movie portrays it perfectly. Homework and SAT/ACT prep, however, is never mentioned, which is a large portion of junior year of high school.

Peter is another character that audiences particularly cherished. He’s a handsome, sensitive jock who makes countless romantic gestures towards Lara Jean under the guise of keeping their fake relationship a secret, but the audience can see right through the heartthrob.

Peter’s softness and transparency brings all teenage girls’ fantasies of teenage boys to life. The stereotypical, emotionless bad boys are a thing of the past. The new ideal is Peter, who will drive all the way across town to get your favorite Korean yogurt drink.

Like in any good rom-com, there needs to be someone in the relationship that is afraid of commitment. Lara Jean struggles to allow herself to be vulnerable in front of others ever since her mother died when she was young. While Peter understands, having an absentee father himself, he still wears his heart on his sleeve so he can fall for Lara Jean. During their first heart-to-heart, Lara Jean admits that she doesn’t date “because the more people you let in your life, the more they can just walk right out.”

Another important component of this movie is the representation of minorities. Lara Jean is played by Lana Candor, who is Vietnamese. The character of Lara Jean is Korean-American, along with her two sisters. This is very important for modern classics, since Asian characters are not normally featured as main characters in media. Also featured is an LGBTQ+ person of color. This kind of representation is very refreshing for young audiences compared to what is on mainstream television.

Lastly, the music coincides well with the cinematography of the film. Lots of scenes start with aerial shots of the landscape of what seems to be Oregon, the setting of the film. The music is reminiscent of songs in the background of travel vlogs on YouTube. Those parts in the vlogs and in the movie were filmed the same way: a beautiful landscape fills the screen while an artsy song plays into your ears. The visuals are stunning and were filmed in British Columbia and Vancouver, according to IMDB.

“To All The Boys I’ve Loved Before” is to be regarded as the new standard for teenage classics. The accurate portrayal of high schoolers, the sensitive nature of Peter, and the refreshing representation of people of color on screen is to become the current standard for teenage films.