// Everyone knows about teeth whitening and how popular whitening strips are. Acalanes has applied this same whitening ideology to none other than this years’ homecoming.

With complex, fast working, dual action, the new and improved Dons whitening agents are sure to lighten things up. The new miracle formula will help strip down egregiously complex cultures into things people can understand in the midst of an on campus controversy over the senior class’ pick of “Aladdin” as its Homecoming theme.

While some say that the implications of this down toning agent are synonymous to terms such as “cultural appropriation,” it is clear that they do not see the point.

Neither the cultural appropriation flap nor the attempt to homogenize the problem with a compromise solution ultimately reconcile the situation when characteristics, customs or  traditions of white and non-white cultures combine or clash.

The Senior class’ invocation of the ancient fairy tale and the Disneytized rendition of it focused simply  on making our 2018 homecoming as entertaining and exotic as possible. That point got lost quickly as some saw offense in dances, costumes, the races of actors portraying characters and more.

Maybe  people  that say the  that movie, characters and  the Acalanes portrayal of them is culturally insensitive simply need to lighten up. 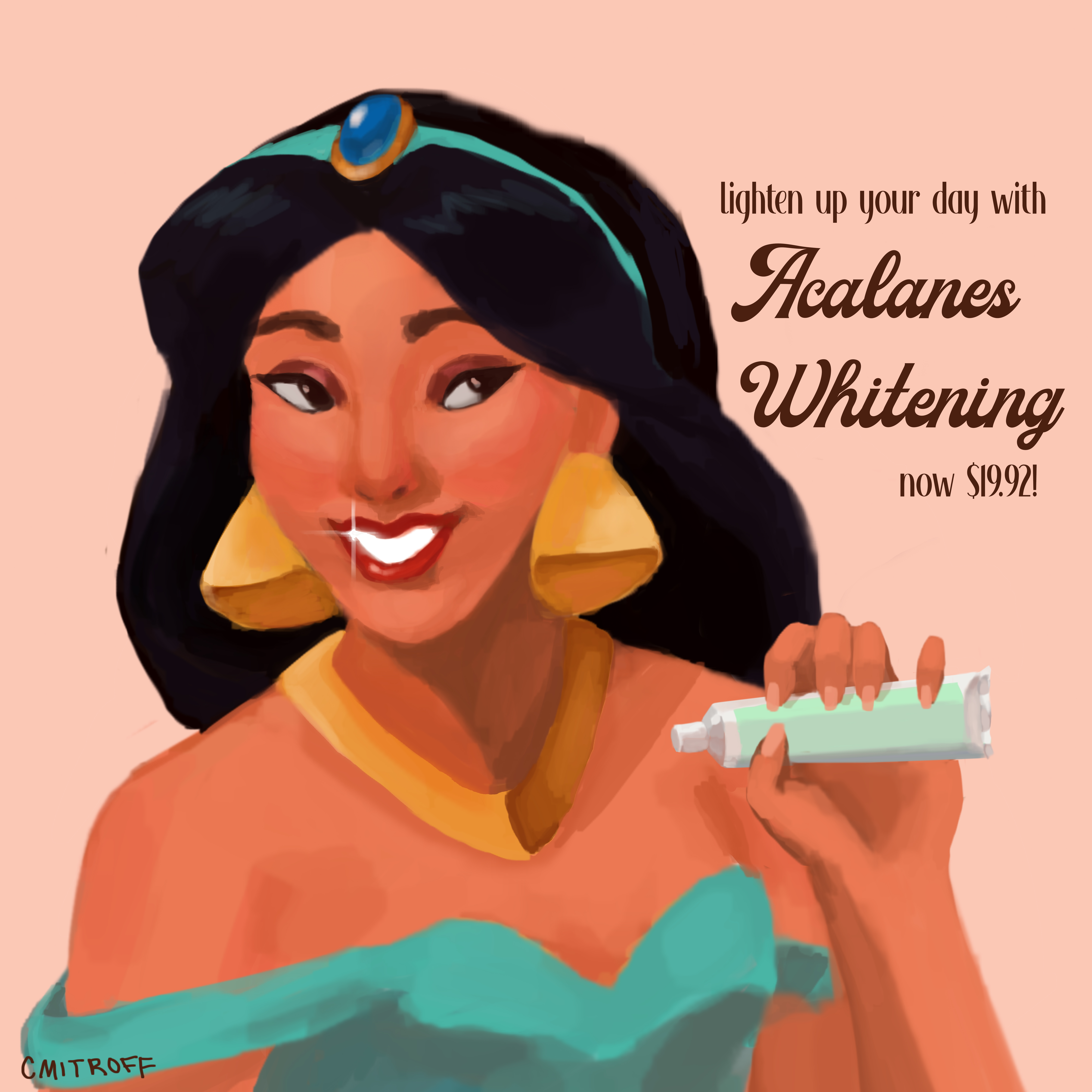 Having a school full of white kids perform a skit based on Aladdin is basically the same as putting a filter on a photo or buying some Ultra Brite  toothpaste. Or how about some Alpha Beta Glow Pad Cultural glow fake tan skin product?  You can try some Jergen’s “Natural Glow Instant Sun” to give you  that flawless, natural looking light bronze overtone. No problem making  darker skin look lighter or lighter skin  look darker unless it comes to the dancers in the skit, of course.

The point is that the overall tendency for cultures of all types to emulate, imitate and  adapt cultural characteristics of another  is not new, not unique to the United States and not necessarily grounds for sensitivity.

One culture’s  focus on playing with shade of color,fashion,cuisine, architecture, dances, traditions or fairy tales should not be thought of as a problem because it is completely normal and actually a part of what is admiringly called cultural  assimilation.

Acalanes unwittingly picked a homecoming theme with cartoon character cultural overtones in a time riddled with people that are eager to  point out so-called “cultural appropriation.”

Even having students at a school that is 72% white, according to a 2018 U.S. News statistic, performing a skit centered on Aladdin does not need to be problematic.

Neither the original fairy tale nor the Disney adaptation are about race.

They are about characters, magic, love, evil and all of those enduring elements of every literate culture.

Though Aladdin is set in the Middle East, Disney’s depiction  is not focused on any  specific Middle Eastern  or Arabic culture and, when taking a look at the characters, it is clear that they are just the same as those in any other Disney cartoon in a setting of non Eurocentric cultures. .

By whitening and brightening this year’s homecoming skit, Acalanes has succeeded incredibly in enacting a process of homogenization, the process of making things similar or the same. The process works to emulsify, or mix, the cream of the milk with the fat droplets so that the two do not separate.

Some people may think cultural homogenization is bad thing, but clotted milk or milk where the cream always rises to the top and has to be skimmed off,or cultures that clot or get skimmed into social, cultural or religious divisions are not a step towards tolerance, inclusiveness or acceptance.

The greater goal should be about  bringing things together not tearing them apart or modifying them into a blend that is supposed to be more wholesome and easy to swallow.

The school’s ‘lighten it up’  campaign is not something inherently malicious, and there is no doubt  that  the school’s latest employment of a  whitening agent were a thoughtful attempt to unify students in a lighter and brighter way.

Acalanes ultimately did  nothing wrong by whitening the story of Aladdin. Nor did any of our students do something wrong by picking the cartoon as a theme.

There is ample room for a moderate, open minded, two sided dialogue on just where the line gets crossed between cultural appropriation and cultural appreciation and what sorts of elements belong in either or neither category.

So remember Acalanes, while watching this year’s homecoming rally, just lighten up.