In front of a capacity crowd at Acalanes, the heavily favored Acalanes women’s water polo team cruised past Campolindo 11-7 on Saturday, Dec. 1 to cap their historic season with the NCS crown–their second in three years. The Lady Dons finished their regular season undefeated for the first time in program history.

After falling into a 1-0 hole to begin the game, sophomore Claire Rowell scored in between two Campolindo defenders to tie the game 1-1. About a minute later, junior Brooke Westphal scored a back-handed goal to give Acalanes a 2-1 advantage. After the Cougars tied it up with just over a minute remaining, junior Jewel Roemer scored on a penalty shot, and senior Lexi Rowell also scored with six seconds remaining.

In the second quarter, the Lady Dons began running with it. Roemer scored two out of the team’s three goals as they held Campolindo score-less. At the end of the first half, Acalanes had a commanding 7-2 lead. 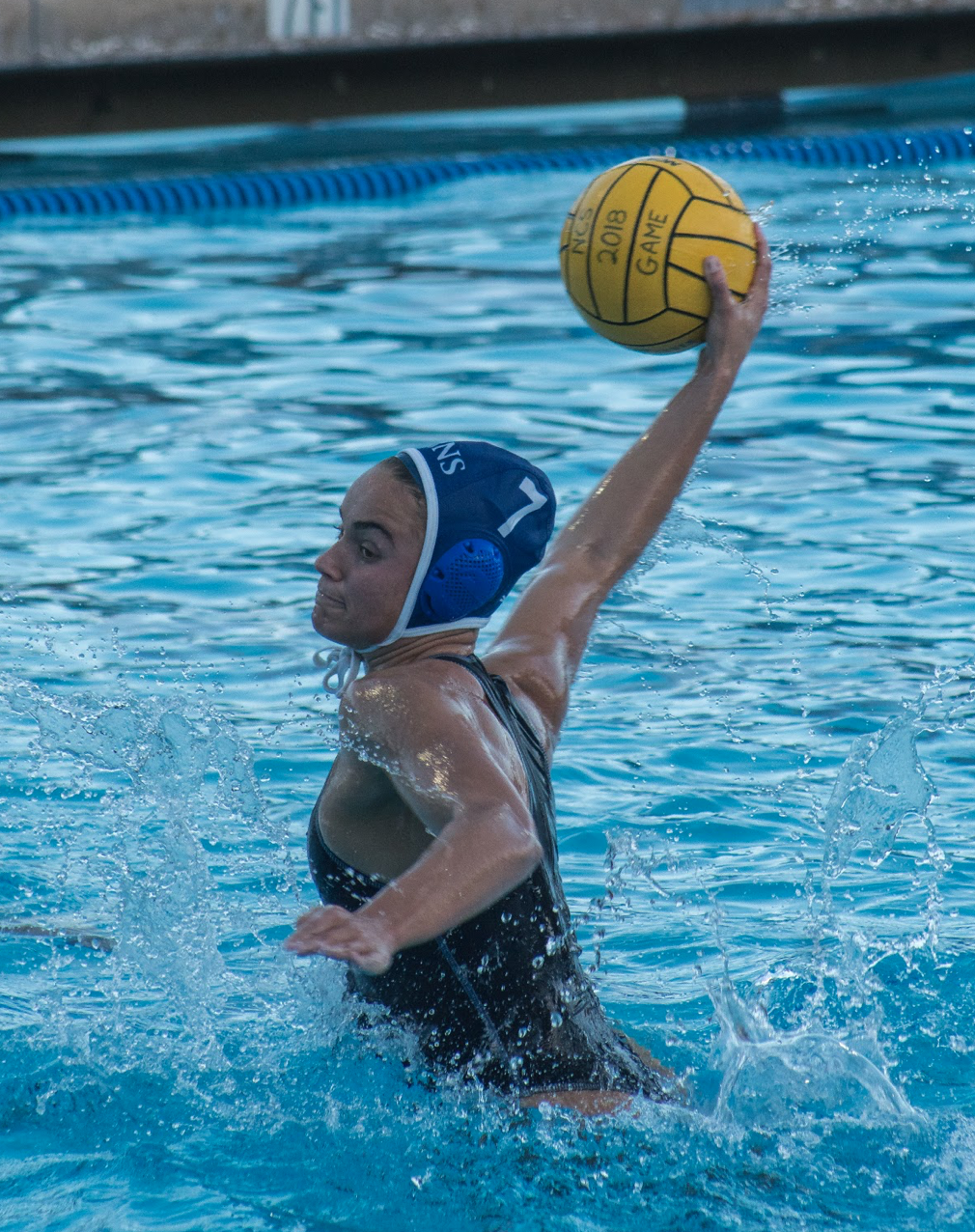 Jewel Roemer scores in the first half, by Ethan Michon

After gaining an 8-2 lead, the Cougars would score two late goals to cut the deficit at the end of the 3rd quarter 8-4. However, the Lady Dons were just too much all game long. Roemer scored her fifth goal of the game early, and senior Kylie Walker had an incredible goal as the shot clock expired. With just over three minutes to go, Lexi scored to give her team an 11-6 lead. The Cougars would score another goal of little significance, and Acalanes won 11-7. The entire team, including head coach Misha Buchel, hopped into the pool to celebrate their undefeated season.

“It was an amazing feeling because we have worked so hard this season and Buchel is such a big part of all we have accomplished,” senior Alex Fellner said. “ It is a celebration for all of us.”

Roemer was the star of the day with five goals. Lexi contributed two goals and several steals. Sophomore goalkeeper Ava Donleavy was outstanding in the cage, making miraculous saves throughout the championship.

Initially, the game was scheduled for Nov. 12 but was continuously moved back due to poor air quality that sparked from the Bute Country Camp Fire. The game nearly got canceled for good, as the California Interscholastic Federation (CIF) Northern California Playoffs were. Due to poor air quality reaching Fresno, the CIF was forced to cancel the tournament that debuted last season. Placed the #1 seed, the Lady Dons were heavy favorites to win that tournament.

“It felt honestly relieving [to play] because we have waited so long and we weren’t even sure we were going to play,” Lexi said. “To finally be able to play and complete the season with a 27-0 record is crazy.”

Lexi got her second championship ring, as she was also a member of the 2016 championship roster. Other players that earned their second rings include Fellner, Walker, Westphal, and junior Mary Beth Heffelfinger.

Next year, Lexi will head across the bay as she has officially signed to play water polo at Stanford University for the next four seasons. Fellner will also play collegiate-level water polo at the University of Southern California next fall.

While the season may be over, Fellner says these past four years on the water polo team have been nothing but memorable.

“We have made bonds for life and being on this team has been the highlight of my high school career,” Fellner said.