// It was a dry day in Lafayette, but last night the women’s basketball team poured in 62 points to soak Northgate in the first round of the North Coast Section (NCS) playoffs at home.

Coming into the matchup, the #4 seed Lady Dons had defeated the #13 seed Broncos twice during their league schedule, including victories of 60-42 and 60-21.

Sophomore Grace Gebhardt won the opening tip, and the Acalanes offensive attack rushed out to an early 9-0 run.

According to junior Lauren Kobashigawa, the initial barrage was the result of excellent energy from the team.

“We had a lot of high energy going into the game because we had home-court advantage. Even though we only have nine players, we felt that energy from the get-go,” Kobashigawa said.

Junior Lauren Frechman hit a three in the face of a Northgate defender to open up the scoring, to the delight of the home crowd.

The next four points came courtesy of sophomore Gabby Schneider, who hit a jumper from the free throw line and one from the baseline on an assist from Gebhardt.

Gebhardt scored the first of her eleven points on the night off of an assist from junior Kaylee Pond, prompting a timeout by Northgate. 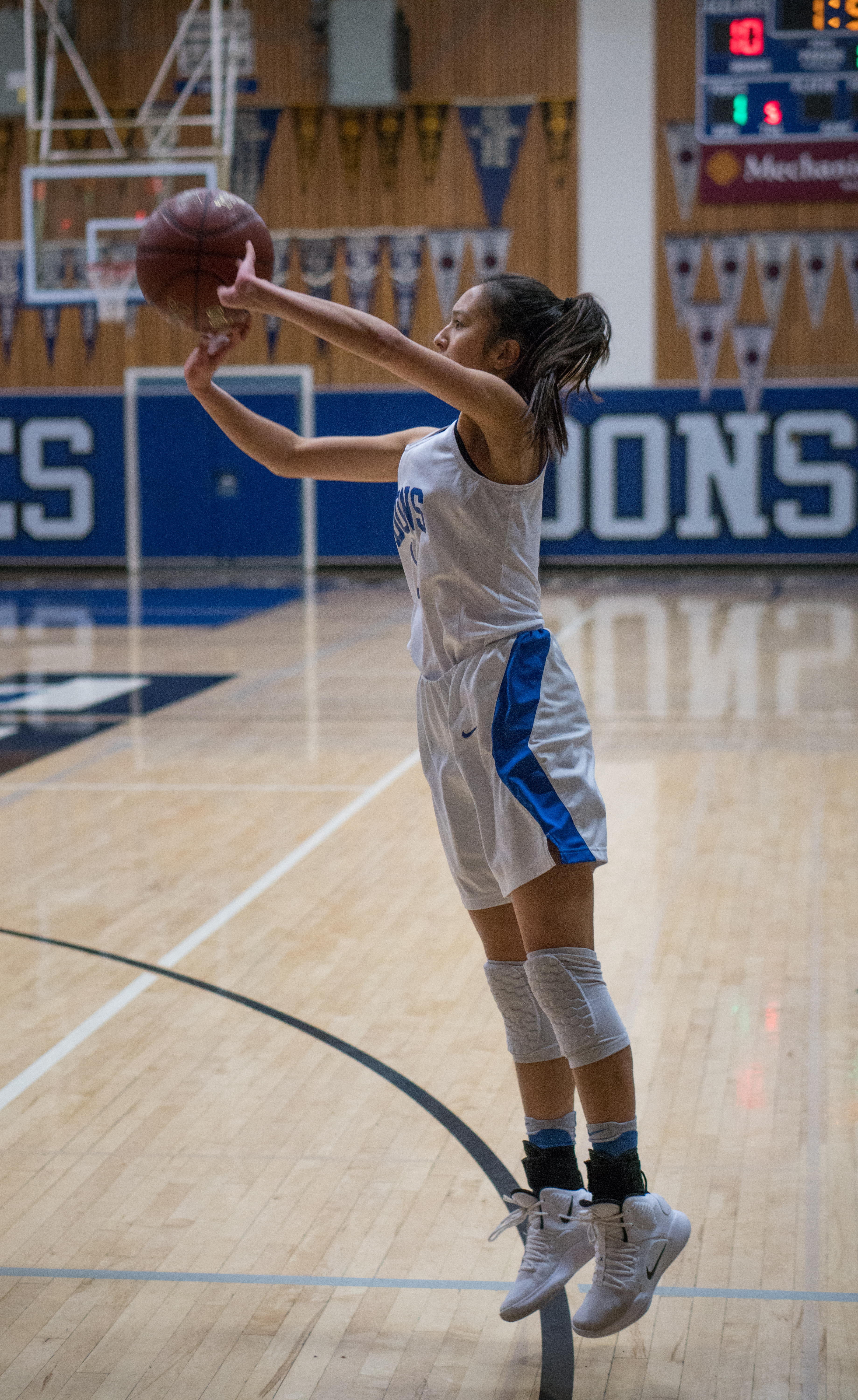 Junior Lauren Kobashigawa takes a shot from the three-point line, by Ethan Michon

The timeout proved a turnaround for the Broncos, as they outscored the Lady Dons for the remainder of the first quarter, despite deep three-pointers from Kobashigawa and junior Mikaela Valerio.

Northgate continued to claw back at the outset of the second quarter, cutting the Lady Dons’ lead to three.

Kobashigawa stopped the leak, going on a 7-0 run of her own. The point guard hit two free throws, a deep three, and a fast break layup on an excellent pass from Frechman; a timeout called on Northgate’s end.

At the end of a back and forth first half, the Lady Dons held a comfortable lead of 33-18.

At halftime, the classic hit “Remember the Name” by Fort Minor blared through the speakers in the gym. Fittingly, the Broncos would not forget the second half offensive performance put on by the Lady Dons.

An impressive display of ball movement throughout the game spread the Northgate defense thin.

A 5-0 run at the beginning of the third quarter by the Broncos represented the last gasp effort by the team in red and yellow to re-establish itself in the ballgame.

Gebhardt secured control of the post, scoring on helpless defenders, including a smooth jumper from the middle of the key.

Frechman hit her second from beyond the arc on a Lauren to Lauren connection from Kobashigawa.

At the end of the third quarter, the Lady Dons held a commanding lead, 48-29.

Kobashigawa opened up the scoring in the fourth on a fastbreak pass from Pond in the first twenty seconds of the period.

A hook shot by junior Daphne Ganter gave the team its 55th and 56th points of the game, as the Lady Dons cruised to a 62-40 victory.

Every player on the nine-women roster got in the scorebook, including the first of many postseason points for freshman guard Michelle Goll.

Gebhardt added 11 down low, as Schneider and Frechman added nine and seven, respectively.

The Lady Dons advance to host the #5 seed Redwood Giants of Larkspur this Friday at home. The two teams share a familiar opponent in Clayton Valley Charter. The Giants defeated the Ugly Eagles by 14, while Acalanes swept Clayton Valley in two matchups this season by margins of five and ten, respectively.

According to Kobashigawa, the Lady Dons will need a similar effort to prevail against a talented Redwood team.

“We have to have really high energy, and come out strong, especially after half time. We tend to have a laggy third quarter, and we can’t do that because it will most likely be a tight game,” Kobashigawa said.