// When presented in an academic setting, history can often appear to be an impersonal slew of facts and statistics. The stories that are passed down from parents allow a more intimate look at historical events and those involved in them.

Acalanes students and teachers were recently granted the invaluable opportunity to be party to the story of Holocaust survivors Sam Ir and Esther Edelman on March 29 in the Performing Arts Center during Academy, as told by their daughter, Margalit Ir.
The event, open to all students, was organized by senior Ari Bornstein, a member of the Anti-Semitism fighting and Israel-supporting organization Stand With Us.
According to Acalanes Associate Principal Mike Plant, Bornstein approached him in October with the idea. Plant suggested the two postpone the event to fit with the curriculum and make the experience more meaningful.

Ir’s connection with Stand With Us began when she invited them to speak about Israel at her synagogue. She is now touring with the organization to discuss her parents’ experience. Acalanes was the first of many stops.

Ir learned the majority of information through her mother’s stories. She first began researching her family story after being asked a question by her niece.

“It drove me to become a genealogist for the family, and I learned an awful lot about my parents. I can take my mother’s family back 300 years,” Ir said.

She also collected significant research on her father’s family.

According to Ir, the journey of her parents averaged 12,000 miles, nine counties, and eight years. They fled to Brest, Belarus in 1939 after Germany invaded Poland. The young couple snuck in through the window of a rabbi to get married.

“No dresses, no flowers, no dancing, no witnesses. Just my father, my mother, and the rabbi,” Ir said.

Her father was taken to prison twice, escaping the second time by breaking a wall apart, brick by brick. While he was imprisoned, Ir’s mother headed south to the Caspian Sea with her one-year-old son and another child on the way. She lost both children.

“She would, now and then, talk to me about the loss of her children, my brother, and sister. It’s now, as I’m getting older that I recognize how resilient she was,” Ir said. 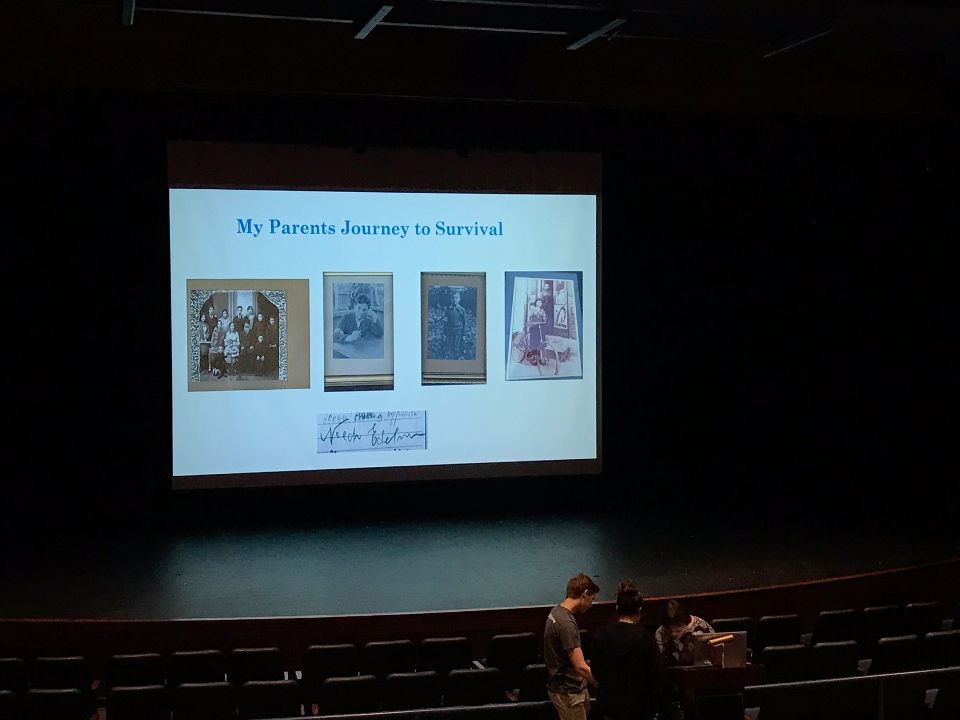 The couple reunited in Esther’s childhood home in Poland after enduring five harrowing years of separation. They fled to Israel in 1947, one year before its war of independence. A few years later they immigrated to the United States.

“It shows how important it is that we have Israel, that her parents were originally able to find refuge there before going to the United States,” sophomore Elizabeth Paul said.

Ir also recounted her aunt’s stories of the horrors of Auschwitz, highlighting the cruel and dehumanizing practices of concentration camps during World War II.

“I cannot imagine myself ever doing any of the things that were mentioned in the story. It seemed to take so much strength and bravery,” sophomore Thibault Vialle said, who attended the Academy seminar.

As AP European History and other classes move into speaking about the Holocaust, Ir’s message and stories will provide students with a more personal view of the horrifying events.

“I think getting a personal story of what happened in World War Two, that there are victims and their children who have lived with the survivors. Survivors’ children are clandestinely experiencing their parents’ pain because of the silence that takes place at home. Most survivors did not speak about their experience unless they talked amongst themselves,” Ir said.

Many students recognized the importance of hearing stories in the context of history and appreciated the rare opportunity to do so.

“History could have a chance of repeating itself. You can’t move on and create a better place without acknowledging the horrible stuff of the past,” Paul said.

Ir left students with three critical messages that she learned from her mother: resilience, persistence, and never giving up on one’s dream.

“If I can impart one thing to you as you go forward in your life, be persistent, stand your ground, be proud, and help everybody else. That will be the greatest success and the greatest legacy that you can leave behind,” Ir said.

To listen to Ir’s full speech, click on the audio file below.