// Tensions ran high as the Dons battled for first in the league against rival Campolindo High School on Thursday, April 25 at home.

Competition picked up in the first few seconds, with senior Jackson Kirke passing the ball out of bounds to give Campolindo the first point. After a two-point run, the Dons won the ball back with a block by powerhouse sophomore Austin Kinnear on the right side. Senior Alex Franke carried that momentum with a hit from the middle to bring the score to 3-5.

With a strong defense on Campolindo’s side, the Dons struggled to find the court. After several attempts by Franke to tip the ball, the Dons forced themselves into a stronger offense. Franke ended Campolindo’s run with a hit from the outside.

Campolindo continued to threaten the Dons, with several aces to make the score 7-14. The Dons began to scramble as Austin Kinnear dumped the ball out of bounds in a lengthy rally between the two teams. Campolindo continued to dominate as Acalanes’ players began to find the Cougars’ tough block. Franke broke that streak with an incredible hit to the ten-foot line, followed by another attack. Campolindo called a timeout, 13-15 as the Dons began to close in on their lead.

Unhinged by the loss, Acalanes brought new energy to the second set. Kirke took charge, shutting down several attempts by Campolindo at the net before the Cougars called a timeout, 5-0. The Dons continued their winning streak, with a deep roll shot to the right corner from Kinnear and another great hit down the line by Franke. With an outside attack from the Cougars, the Dons lost the ball, 10-6.

Campolindo continued to decrease that deficit, hitting several balls down the end line. Intent to turn the game around, senior Griffin Johnson rolled the ball to the deep left corner, 14-11. With several blocks from Kirke, the Dons increased their lead, 20-15. Scrambling, Franke ended the match with another hit down the ten-foot line, 25-21.

The crowd now electric, Acalanes headed into the third set with confidence. Both teams played with certain zeal before Acalanes called the first timeout, 4-4. The score remained close as players on both sides continued to dominate in offense. Acalanes struggling on defense, the Cougars began to take charge of the game as Kinnear’s block crumbled. Kirbach frustrated with his teammates, Acalanes’ confidence withered. In a miscommunication between Kirbach and Franke, it seemed the Dons were destined to lose the game, 13-19. After another rally, Kirbach set Kirke one-handed, who sent the ball flying down the court to bring that deficit to four, 18-21. Campolindo unable to contain Kirke, he hit another ball onto the Cougars’ side, 21-22. Acalanes’ offense impressive, junior Nikolai Hefferman turned the ball inward with a powerful block, tying the game 22-22. 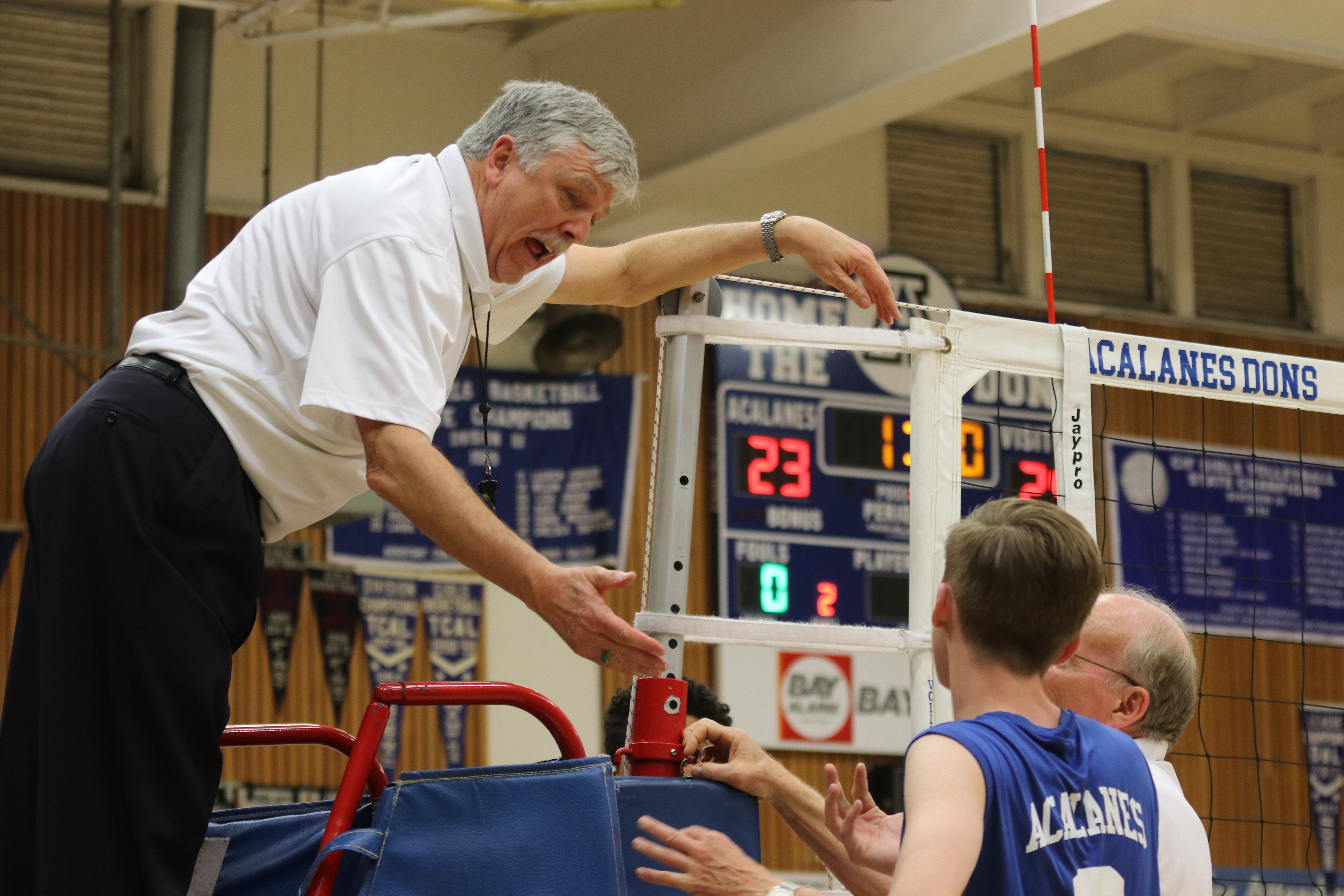 With just one set to go, Acalanes came out swinging, winning the first point with a dump by Kirbach. Franke continued to find the court, swinging high over Campolindo’s block to make the score 4-5. The Dons unable to hold their block, Campolindo began tooling the ball off of Acalanes’ hands, increasing their lead by four. With a quick set by Kirbach, Johnson hit the ball down the middle, 6-9.

After a mishit by Franke, Acalanes called a timeout, 11-14. Coming back stronger, the Dons proved their middle hitters to be an asset as Kirke earned yet another kill down center court. Hampered by their defense, however, Acalanes struggled to handle Campolindo’s impressive offense. Depending heavily on their front-row hitters, Franke hit the ball high off of the Cougars’ hands to bring the score to 14-15. Kirke continued to dominate with two blocks at the net, 16-15. Franke proved his mastery of the game with a hit straight down the line before Campolindo called a timeout, 17-15.

Tied at 19-19, tensions ran high between the two teams. With several kills by Campolindo, the Cougars blocked Franke at a crucial moment, 20-22. A powerful tip by Kirke brought relief to Acalanes as Kirbach set the ball high. In a questionable call by the referee, the point went to Acalanes, 22-23.

In a critical play, Kinnear blocked the Cougars’ ball, and the crowd went wild. Frustrated, Campolindo hit the ball out, bringing the score to 24-23.

The score now tied, 24-24, Campolindo served the ball out. The pressure too much to handle, Campolindo’s middle hit the ball long to give the Dons first place in the league, 26-24.

“We know how to play big games, but we know how tough the North Coast Section (NCS) is. We know anybody could beat anybody, so we have to play our game and not take anybody lightly,” Kirbach said heading into NCS.

North Coast Section rankings will be available on Sunday, April 28.