// Walking down Market Street, we chanted, “No more coal, no more oil, keep your carbon in the soil,” our voices echoing through the financial district of San Francisco amidst a sea of other students protesting climate change. With the reputation we have for civil disobedience and initiating change, it may not come as a surprise that this protest was largely made up of students from across the Bay Area. However, the defining characteristic of this march was that it took place on a Friday morning, causing many students to miss school.

This ongoing protest is known as “Fridays for Future”, and this Sep. 20, in particular, was part of the Global Climate Strike that took place across every continent (including Antarctica) and in 163 countries.

Fridays for Future was started by a teenager in Sweden, Greta Thunberg. She started striking in front of the Swedish Parliament from school every Friday to bring awareness to the inaction of politicians and corporations in regards to climate change. Over the course of this year, she gained an international following and encouraged mass school strikes for climate justice. Today was one of those strikes.

We attended the strike in San Francisco alongside students from many other schools, including Berkeley, Skyline, Oakland Tech, Oakland, and El Cerrito High School. We were even able to spot and meet up with other Acalanes students.

The protest was an incredibly moving experience, and seeing how many people have similar ideals and passions as us gave us some hope for the future. Everyone shared a similar excitement, participating in the chants and holding up various signs calling for climate justice.

The signs themselves conveyed the common message of a call to action against corrupt politicians and satanic corporations. Containing witty jokes, sarcasm, and sobering messages about our life expectancy on this planet, we both agreed that reading the signs was one of the best parts of the protest. 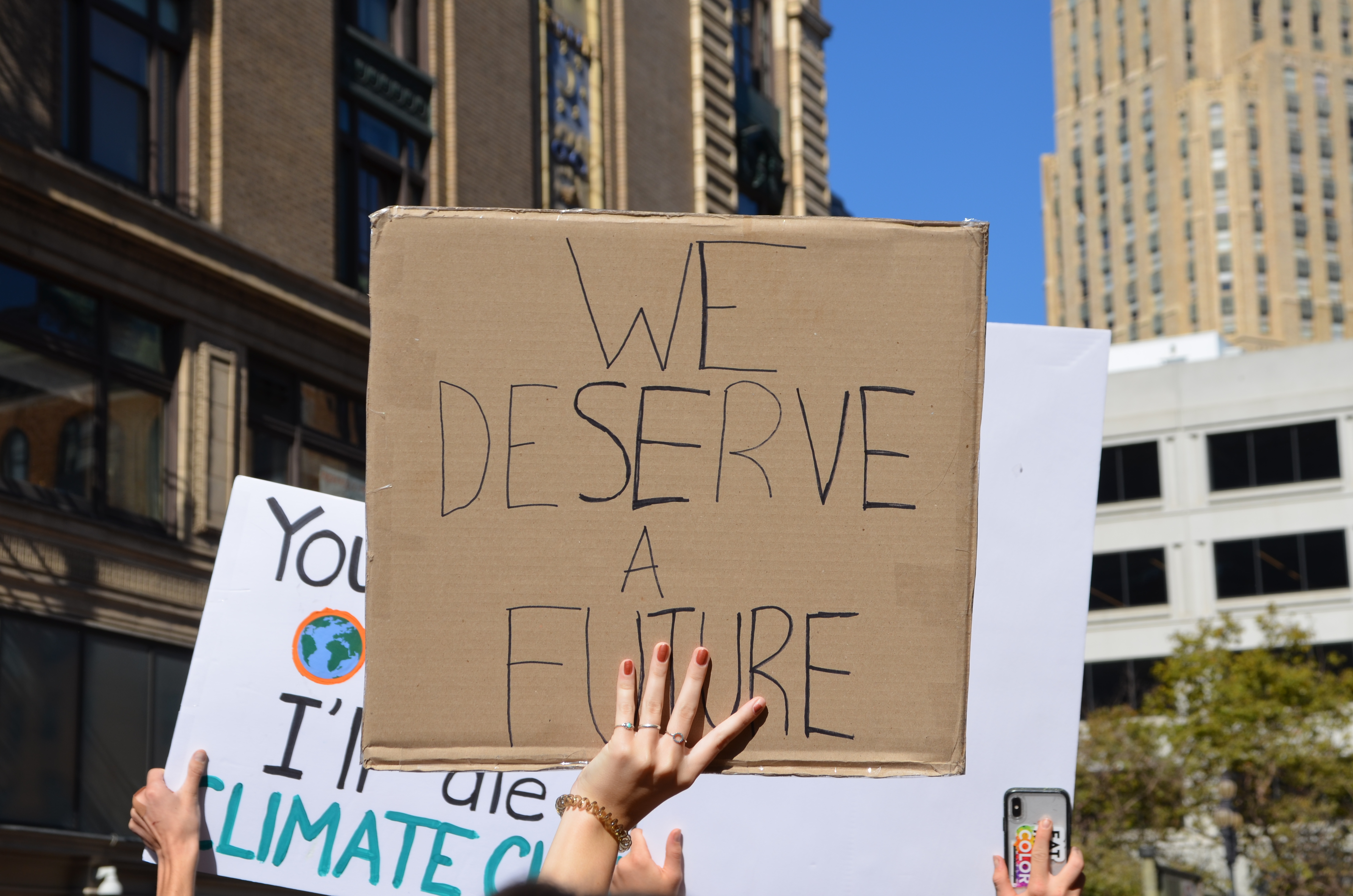 Both of us carried our own signs that we had made the night before. Emmy tied her sign to her backpack, reading “I’m so tired of being scared,” and Katrina’s had a giant hand-drawn Earth surrounded by the words “System change not climate change.”

One of our favorite sign themes that we noticed were ones that referenced the fact that we were out of class to protest the actions of other generations. It always seems like our generation is the one that has to bear the burden of the mistakes and shortcomings of the previous generations. It has come to the point where we have to miss valuable education in order to draw attention to current issues, and this in itself is unacceptable.

Missing school today created complications for us and other Acalanes students attending the strike. We had to plan ahead, taking tests during lunch the week before and coordinating with other students to get the work we didn’t receive.

Additionally, we both missed out on the release of the first issue of Blueprint, so we didn’t see how our hard work was received by the student body.

Despite the stress that missing school caused, seeing the impact that we created and the movement we are involved in made it worth it. The little moments of defiance and joy we saw in others were inspirational.

At one point, there was an elementary school group with 15-20 students leading chants such as “Hey, hey, ho, ho, climate change has got to go” and “Show me what democracy looks like.” It touched us deeply to see little kids being so outspoken about this issue yet sobering that children of that age are having to deal with this issue. 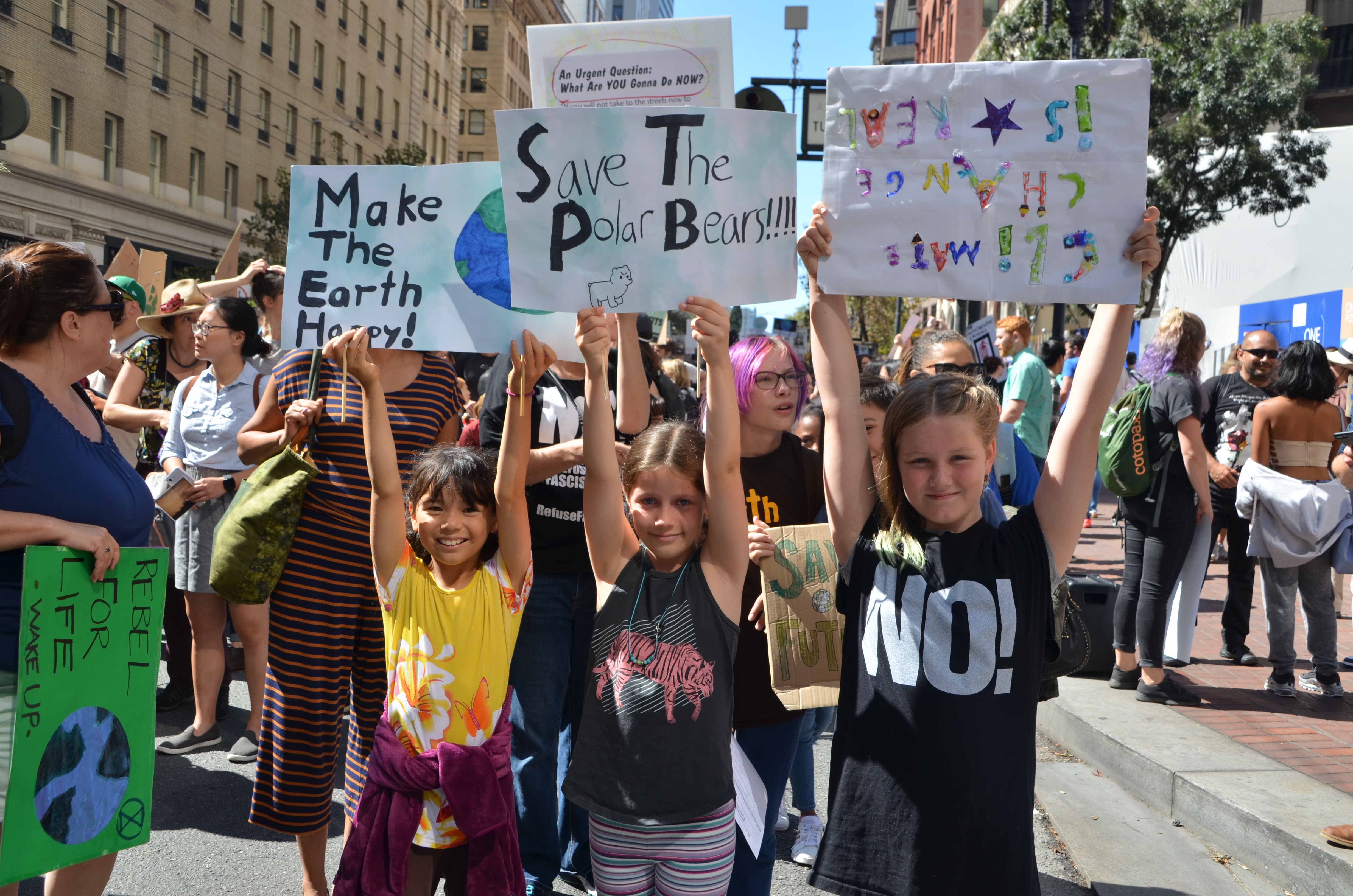 Another especially moving sight was that of a mother carrying her baby and holding a sign. “Save the planet for Jude (I’m 17 months old).”

Coincidentally, there are 17 months left to bring down carbon emissions before we go into an irreversible climate crisis. The time frame keeps getting shorter as corporations keep scaling up production and emissions with no regard to the children of the future such as Jude.

Unless radical change happens, these children will grow up on a dying planet, unable to reverse the mistakes of the past, and they will most likely die with it.

On a lighter note, one fun memory was seeing a disheveled man with a guitar singing a version of “When the Saints Come Marching Home” with the lyrics altered to an environmental standpoint. Strumming guitar chords to a morbid yet cheery tune was a sharp contradiction to the screams and shouts around us.

At 1 p.m., the protest suddenly halted and took part in a moment of silence. It was eerie to see so many people being completely quiet and made us consider the significance of the moment.

The moment of silence was for many things. It honored the animals, species, lands, and people who have died as a result of the climate crisis. Most importantly, we later realized that it was to honor the future that could be lost if climate justice is not fully achieved.

Overall, the protest was inspiring in how it showed the unity of our generation against this seemingly insurmountable issue. It had positives and negatives, highs and lows, left a major impact on both of us and left us inspired. We have no regrets about not going to school because we were given the opportunity to stand up for what we believe in and take action for it.